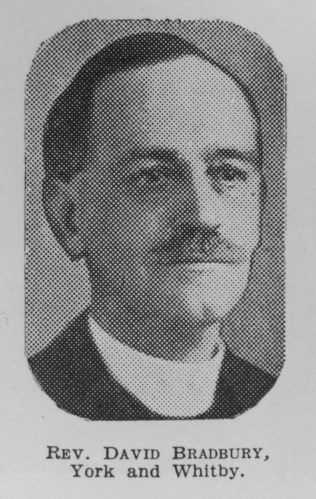 David Bradbury: born at Walsall Wood in Staffordshire on 6th June 1880, the son of a Primitive Methodist local preacher. His abilities in his late teens led him to be appointed Hired Local Preacher’ at Wigston Magna, from where, after some two years in business, he entered the ministry as a married man with two children. He served in the following circuits: Leicester II, Birmingham, Grassington, Huddersfield, Edinburgh, Leeds IX, Stoke Newington, Scarborough II, York (Wesley) and Darlington (North). On Methodist Union he was appointed Chairman of the York and Whitby District and regarded it as an ecumenical landmark that he was the first Primitive Methodist to accept an invitation to superintend an ex- Wesleyan Circuit.

In his ministry he combined keen evangelism with wide cultural interests and he enriched the worship of his congregations by many special recitals of poetry and music. Although widely known as a missioner, elocutionist, preacher and administrator, he is remembered mainly for the spirit which shone through everything he did. He was a very gentle man whose courtesy and patience remained to the very end of his life. His jollity and fun rejoiced three generations of his own family and showed through increasing weakness and distress in the very last week of his life. He died in peace on 11th July 1974 in the ninety-fifth year of his life and the sixty-fifth year of his ministry.

David was born on 6 June 1880 at Walsall Wood, Staffordshire, to parents David,, a coal miner, and Alice.

The 1901 census records David as a draper shopkeeper and local preacher,