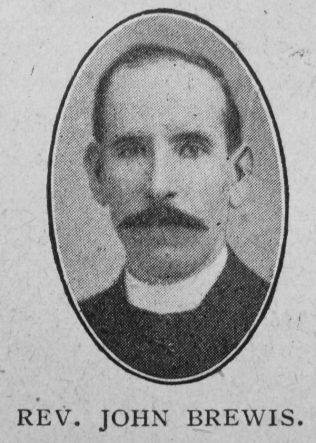 In the passing of John Brewis we have lost one of the most beautiful characters in our ministry. He was in the prime of life, and all the strength of his life was devoted to the service of his Lord and Master for the good of men. He was loved by all his brethren who knew him, and the people amongst whom he laboured all bore one testimony. He was a good man, and his goodness was felt by all who came into touch with him. He left his home at Middleham, early on Sunday morning, June 13th, to take special services for our Wesleyan friends higher up the dale, and, when about five miles from home, the tragic accident occurred. No one saw it, but later he was found on the roadside unconscious, and remained so till 2.30 in the afternoon, when in his own home he passed away.

Mr. Brewis was born at Gosforth in December, 1872. His father and mother were hard-working people, though not at that time religious, but when he was old enough his mother sent him to the Wesleyan Sunday school and Band of Hope. At fourteen years of age he gave his heart and life to God. Soon after he became a teacher in the Sunday school, and then a local preacher, and had the joy of leading his mother to Christ. He left the Wesleyan Church and joined ours at West Wylam, and went to Glasgow as hired local preacher. His health broke down, but afterwards he recovered and entered the ministry in 1903.

He laboured with much success in the following: circuits; Cardiff, Chipping Norton, Northampton, Brinkworth, Shildon and Middleham. In Shildon he was in close touch with the young men, and wrote scores of letters to them when they went to France. It was the great desire of his heart to be an Army Chaplain. That was denied him, but in 1917 he spent four months in France in the Y.M.C.A. huts, and was a fortnight in the dug-out on Vimey Ridge. He faced all danger with a Christian courage, and the soldiers loved him as a brother.

He was a district official when at Brinkworth, and a delegate to Conference. His chief ambition was to win men for Christ. For this he preached with holy fervour, and saw much result for his labours. As a pastor in the homes of the people his presence was a benediction.

In 1909 he was married to Miss Ivens, the daughter of the Rev. Tom Ivens, Wesleyan minister. She has been to him a splendid helper in all his work, and our hearts’ sympathy goes out to her and the girl and boy who are left to mourn their loss. We laid the body to rest on Thursday, the 17th of June, amid the most beautiful surroundings. He sleeps among the hills he loved. A large company was present, especially from Shildon. The Rev. Tom Robson conducted, and gave a fine address. Others taking part were The Vicar (the Rev. H.G. Topham), the Revs. Watson and Illingworth (Wesleyan), the Revs. J. Bradley, T.S. East, J. Toyn, G.B. Richardson, Irving Graham, E. Evans and T. Elliott.

The friends at Middleham showed a fine spirit in doing everything possible to help the brave woman to bear her terrible grief. And our prayer is for her and the children, that they may be kept by God till they meet their loved one again.

John was born on 27 December 1872 at Gosforth, Northumberland, to parents John, a coal miner, and Margaret.

He married Carrie Constance Ivens (1886-1980) in the spring of 1909 in the South Stoneham Registration District, Hampshire.

Note: At the time of the 1911 census, John and family were living at Brinkworth, Wiltshire.