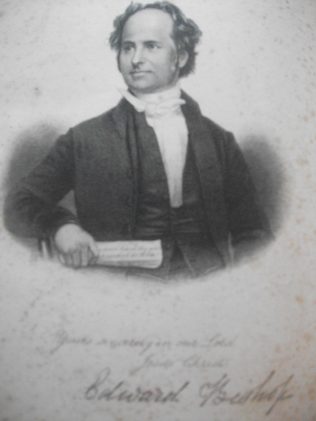 Edward was born on 5 December 1810 at Moccas, Herefordshire to parents Edward and Mary. He was baptised on 5 January 1811 at Moccas. Edward went to school until the age of 9. In 1826 he was induced to attend a Primitive Methodist mission in the adjoining parish. After attending on a few occasions, he was converted under the influence of William Towler. Edward became a local preacher in 1827.

On 8 June 1834, Edward and John Ride attended the quarterly meeting of the Mitcheldever branch and held started to preach outdoors. They were falsely accused of leading and heading a riotous mob. They were brought before Winchester magistrates on 19 July to answer the charge and were detained at Winchester jail until 1 August 1834. When the case was finally heard at the Quarter sessions the charges were proved false.

Petty relates that Edward became superintendent of the Wallingford mission in September 1834. Powerful lovefeasts were recorded at Wallingford on Christmas day 1834 and at Ewelme on 9 February 1835. Permission was also obtained to visit the workhouse and preach to the inmates. In March 1835 the annual increase for the mission was recorded as 151.

Winchester proved a difficult place for the Primitives to gain a foothold in and it wasn’t until 1853 that they managed to open a chapel in the city. Ironically, they were able to buy a chapel vacated by the Congregationalists, who had built a new chapel on part of the ground where Edward and John Ride had been held in prison some twenty years before. Both Edward and John Ride were able to participate in the opening services of the PM Chapel in Winchester.

Edward was secretary of the Itinerant Preachers Friendly Society in 1861/2.