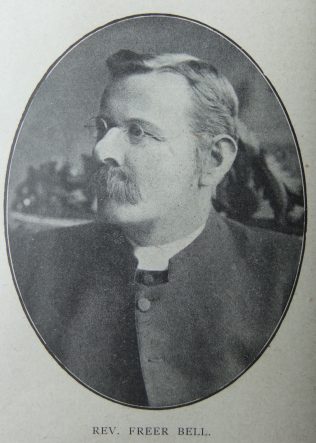 Freer was born in 1859 at Goxhill, Lincolnshire, to parents William Hunter Bell and Fanny Gilliatt. William worked as a joiner and painter. Freer was baptised on 13 November 1859 at Barrow upon Humber.

Freer had an interest in temperance, education, and political and social reform, but the ordinary work of the PM Minister was his meat and drink.

His obituary records that he had an alert mind, and was an evangelical preacher devoted to the welfare of young people; he gathered around him a band of young men who spoke thankfully of his influence among them. He had distinct business abilities and carried through several building schemes, seeking to improve everywhere the material aids to his spiritual work.

He suffered three terms of imprisonment for conscience sake as a Passive Resistor.

Freer married Ada Gertrude Hagestadt (1860-1946) in the spring of 1889 at Patrington, Yorkshire. Ada was an organist, Sunday school teacher and social worker. Census returns identify one of two children.