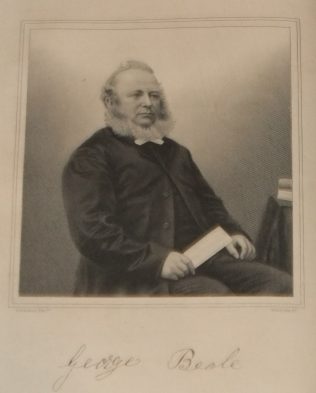 George was born in 1815 at Easton, Hampshire to parents James and Sarah. He was baptised on 18 June 1815 at Easton. He was converted through early PM missionaries visiting Hampshire.

Much of his early ministry was spent in breaking up fallow ground, and pushing the conquests of the cross into the regions beyond.

On one of his stations George says; ‘I had no home and often during the winter no bed. I thought of the blessed master who had not where to lay his head.’ Most of his preaching was in the open-air.

He saw an increase of 550 on his stations during his active ministry.

The funeral of the Rev. George Beale, of Craven-street, who passed away on the previous Monday, took place on Friday last. The body was conveyed to the Primitive Methodist Church, where the first part of the service was gone through, the Rev. J.H. Green and W. Scruby taking part.

A short address was given by the Rev. D. Harding, who stated that their deceased brother had for 48 years been in the ministry of their connexion, thirty-one of which were spent in active labour, and seventeen as a supernumerary. Though not a great preacher in the accepted term, he was an earnest, plodding, servant of Christ, and was made the honoured instrument of winning many souls for his Master. His goodness was his greatness, and many will be the crown of his rejoicing on the last day.

The hymn “Give me the wings of faith to rise,” having been sung, an appropriate voluntary was played as the body was removed to the church for conveyance to the Cemetery, where it was laid in sure and certain resurrection to eternal life. Several of the congregation who were present also attended the last ceremony, though inclement weather prevented all doing so.