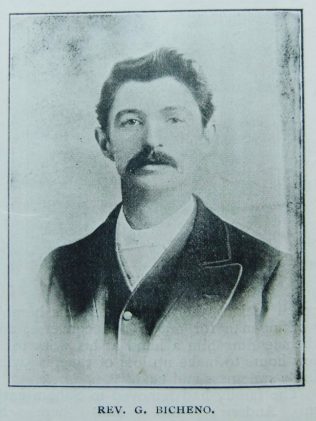 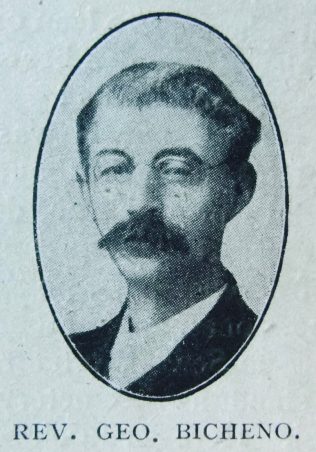 With the passing of the Rev. G. Bicheno a large place has been left vacant in the heart of multitudes, for he possessed in a remarkable degree the power of winning the deepest affection of those who knew him. It is given to few men to be loved as he, for “we all loved George,” as the Rev. S. Horton remarked when speaking of him to the writer. The Rev. W.H. Matthews spoke for very many beside himself, when he said on the day of his burial: “I have never known a man who has grappled my affection like George Bicheno. He laid hold of you in a way men generally do not.” We have never known a more unselfish, generous, loveable soul than he. In his combination of gifts and graces his was a unique personality. Born in the pretty village of Over, in Cambridgeshire, of poor though noble parents, to his parentage and home training he owed much, as he always himself affirmed. His early environment, too, had much to do in moulding his character. Cradled, as he had been, in the lap of Nature all through his life, he retained a freshness and originality which are Nature’s gifts to her children. It was chiefly due to home influences that he was led to love the Lord Jesus Christ and consecrate himself to His service, and at the age of seventeen become a local preacher. While still a youth the great city drew him unto itself, and it was in a large business establishment in London that he learnt lessons which were of in-estimable value to him in subsequent years. In connection with Surrey Chapel, he found the opportunity of exercising his gifts as a Sunday school teacher and lay preacher, which he did with such marked success that he was urged to become a candidate for the ministry. After much prayerful consideration, he decided to yield to the request, and shortly after passed his preliminary examination. For eighteen months he served the Luton II. Circuit as a hired local preacher, and he still lives in the hearts of the people at Luton. He thence passed on to the college in Manchester, and it was there we first met him. His  true-hearted manliness endeared him to all his fellow-students, and his intellectual abilities gave to him the premier position. All were agreed that in this case, at any rate, the best man was at the top. Within the confines of a college a man is apt to reveal both the worst and the best side of himself. In his case, however, there was no worst to reveal, for his life was transparent goodness. One day a man was ploughing a field just outside the college. Bicheno challenged a fellow-student, who had come up straight from the land, to plough the straightest furrow. The challenge was accepted, and with much diffidence the ploughman was induced to entrust the plough to his hands, and stood amazed at the result. In this was a parable, for some of us who watched him then; now look back on the furrow of his life to see it just as wondrously straight. Never has there been any deviation from the lofty ideal and fixed purpose. It is impossible to recall a shady act or an unkind word.

On leaving college he was appointed to the Balham and Brixton Mission, London, where one year’s work showed an increase of forty-six members; and the Church revenue nearly doubled. At the end of the year the Conference moved him to Mount Tabor, Bristol, to grapple with what appeared to be an insuperable difficulty, the superintendent of the circuit being the Rev. W.H. Matthews. It was a happy combination of men. Speaking of that time, Mr. Matthews said in giving the address at his burial: “We first met about thirty years ago, and from that day until now not a shadow has passed between us. We always seemed to understand one another; think the same things and walk the same ways. I am just now reminded of David and Jonathan— ‘Thy love to me was wonderful passing the love of women.’ It is very difficult to analyse the character and make up of George Bicheno. He had a winsome personality, delightful innocence, a strong vein of humour, a keen sense of the ludicrous. The most joyous days of my ministry we spent together.” We remember the eulogistic terms in which the young colleague was accustomed to speak of his “super.” For him he had an esteem amounting almost to reverence, which remained with him to the end. In five years the debt was reduced at Mount Tabor by nearly £1,000, and the ordinary contributions of the Church raised from £16 to £96 per annum, and the place, with Albany, became a self-sustaining circuit. In addition, £500 was raised towards a new school at Albany. Subsequent spheres of service were Clitheroe, Keighley II., as second preacher, and Shipley – in each of these circuits his fame abides.

It was at old West Street, Hull, he began with great success the special work for which he was to be used henceforth by the Conference – the saving of derelict causes or the establishment of new ones. Kettering twice and St. Annes-on-Sea witnessed his triumphs, and stand as monuments to his faith and zeal. Here miracles were wrought, and God evidenced what He can accomplish by a consecrated personality. The record of this work is widely known, and will find an abiding place in the annals of the Church. At the close of his second term at Kettering, desiring a return to the ordinary work of a circuit, he accepted an invitation to superintendent Hull I., but, yielding to the pressure of the Missionary Committee, he went to Eastbourne in the hope that there also the situation might be redeemed and a prosperous Church built up, but without knowing it, his work was already practically finished. During all the years – even in the college days – he was very frail physically. To him death seemed always very near. His service all the time was less or more “In Weariness and painfulness,” often when it was least suspected by others, for amidst it all he carried a cheery face and a smile. Surely never was a more patient and optimistic sufferer than he. Many expressed wonder as to what he would have accomplished if he had not been so completely handicapped physically. He never so wondered, he was quite content that it should be so, for even his physical weakness, he was convinced, had “fallen out rather for the furtherance of the Gospel.” He put in a good day’s work, longer than either he or any of us expected, and what a record he has left – not only of material prosperity in the Church  – but of lives transformed and hearts strengthened! What a genius he had for helping and calling forth the best in others! A fellow student, the late P O. Hirst, said to the writer years ago: “Is it not strange how we have all come in lean on Bicheno? ” What a great burden-bearer and encourager of others he was!

It was in his own home, “Sunrise,” Eastbourne, after weeks of pain patiently borne, during which time everything was done for him which loving hands could do, he “passed away in beautiful peace” on Monday, November 8th, 1920, His mortal remains were laid to rest in the cemetery at Kettering, the service in the church being conducted by the Rev. T.G. Gardner (Pastor), the following ministers taking part: The Revs. G. Armitage, representing the General Committee; J.T. Barkby, the Missionary Committee; W. Christie, the District Committee; J.H. Hirst, Birmingham; and T. Harrison, Belvedere, the address being given by  Rev. W.H. Matthews, of Bradford. A crowded congregation of friends from far and near gathered to show their esteem for our dear brother, and their sympathy with Mrs. Bicheno, Elsie and Clifford, whom we commend to a loving Father’s care.

George Bicheno could never have been George Bicheno but for the purity of his spirit, the depth of his faith, and the strength of his loyalty to God and the service of man.

George was born on 26 April 1863 at Over, Cambridgeshire, to parents James and Elizabeth. James worked the land, an occupation George followed when he commenced work.