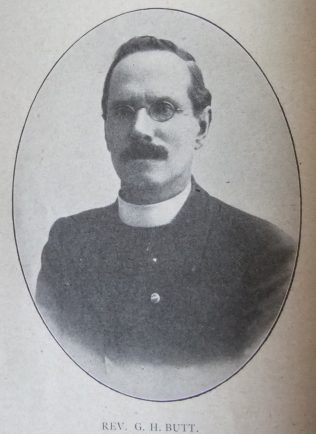 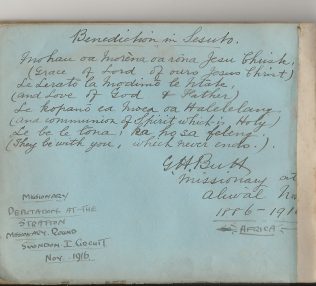 George was born in 1867 at Wilton, Wiltshire, to parents George Edwin Butt and Sarah Jane Alford. George, senior, was a PM Minister.

George joined the Church whilst his father was stationed at Reading and was soon put on the plan. George had not settled his vocation, nor was he on ‘full plan’, when the Missionary Committee requested him to go out to the Aliwal North Mission to take charge of the Jamestown Church and day school.

On arriving in Aliwal North, George found that another teacher had been found for the day school at Jamestown. George therefore transferred his services to the Aliwal Native School and visited the Jamestown European Church every fortnight to take the services, a journey of thirty-six miles.

George toiled for twenty four years, combining the role of minister with that of being headmaster of an important school.

His obituary records that he was a minister of great devotion and faithfulness. His preaching was exegetical, and was marked by careful preparation.

The world of nature was a constant source of wonder to him, and astronomy was one of his special studies. He possessed a keen sense of humour, had a living interest in cricket, and played a good game of tennis until the end of the summer before his passing.

Kindliness and serenity, faithfulness and missionary zeal were the seals on the life of this servant of Christ.

George married Hilda Cusens (1870-1946) in 1896 in South Africa. Hilda used her gifts as an educationalist and musician to support the work of her husband. Census returns identify four of five children.