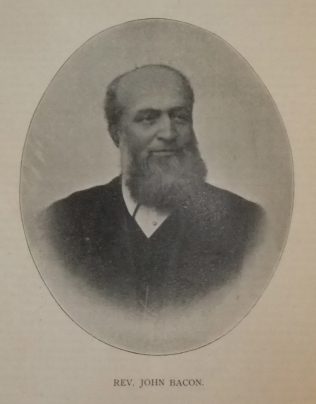 John was born on 14 May 1841 at Nottingham. His father James was a master hatter and useful local preacher.

As a boy, John attended Hockley Chapel and Sunday School. He was converted aged 16 and was soon a Sunday School teacher and member of the choir. Samuel Antliff directed John in local preachers studies. John took his first planned service on 18 April 1858. He was recommended for the ministry by John Dickenson.

John’s preaching was eminently practical, and his work was that which endures, because his aim was the salvation of sinners, the purification of believers and above all the glory of God.

John published a lecture on kindness.

His obituary records that John was pure in motive, noble in ambition and heroic in the struggle for righteousness. He hated all meanness and sham. He was ever earnest in the salvation of men. He took the work of the ministry seriously, and discharged its duties with dignity and faithfulness.

John served as Secretary of the Grimsby and Lincoln District Synod and was a General Committee Delegate for the South Wales District.

John married Ann Metcalf (b abt 1840) in the summer of 1867 at Nottingham. Census returns identify four children.