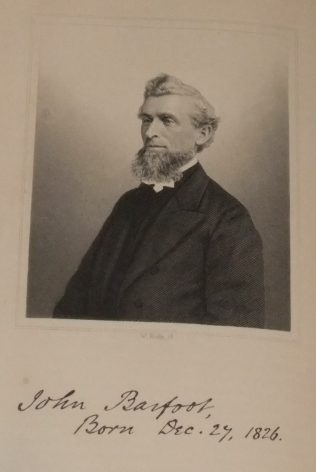 John was born on 27 December 1826 at Thurmaston, Leicestershire to parents John and Mary. He was baptised on 31 December 1826 at George St PM chapel, Leicester. His parents lived in the house adjoining the chapel and his father was a local preacher.

John gave his life to Christ aged 14 whilst suffering a fever, which threatened his life. He gained his education through sel-study. John became a local preacher when he was 16.

In the spring of 1847, John was called into the ministry to assist Samuel Antliff on the Earl Shilton station. All his ministry was within the Nottingham district.

John’s obituary records that his sermons were always well prepared and the doctrines they contained were in perfect accord with the standards of Methodist theology. His discourses were always delivered quietly, but earnestly and impressively. His language was so simple that all could understand it without difficulty, and so correct that all could listen without a jar on their feelings. He was conscientious and diligent in discharge of pastoral duties.

John was a superintendent for 33 out of 35 years as an itinerant minister. He was considered most careful and judicious in this role. He would not build and leave his successors to provide for payment.

Piety behind the Plough; or, Observations founded on the life and character of Mr. George Warren, 1864

A diamond in the rough; or, Christian heroism in humble life: being jottings concerning that remarkable peasant preacher, William Hickinbotham, of Belper, Derbyshire. 1874