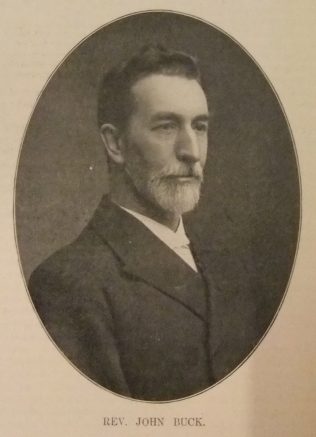 John was born on 18 November 1850 at Carbrooke, Norfolk to parents Henry and Charlotte. Henry was a cordwainer.

John was led to Christ at the age of eight but did not join the Church until he was twelve. He received his first membership ticket from Rev Robert Key, who placed his hand upon his head and said, ‘Keep a good boy, grow up to be useful, and when I am gone step into my shoes.’

John began to preach at the age of fifteen. His ministry began with an invitation to supply on the Berkhampstead Mission in 1873.

John was a very methodical man, and kept faithful accounts of all new members received on trial in his circuits. His diary shows that in his forty years’ ministry some 2,381 were added to the roll.

In 1899 symptoms of diabetes manifested themselves, but un spite of weakness and pain he still stuck to his work which he loved so well. At St Ives, the disease became more virulent, and complications set in, so he was compelled to seek superannuation at the next conference.

John married Alice Maud Mary Mann (1855-1939) in the summer of 1878 at Hastings, Sussex. Census returns identify one of two children.