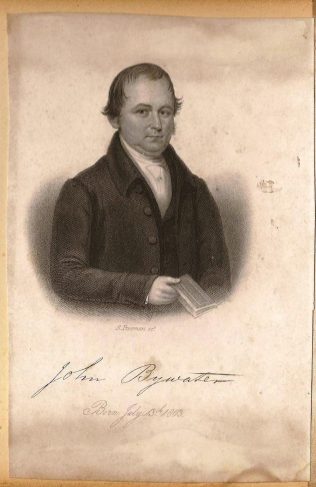 Kendall records that John was very useful in the early days of Primitive Methodism in Leeds, being a stabilising influence during difficult times. Later, he was a noted chapel builder and administrator.

John was appointed Secretary to the General Mission Committee for five years from 1854. He was secretary of Conference in 1843. John served on the PM Jubilee Committee as general secretary in 1860.

John married Eliza Grimshaw. Eliza was born on 15 January 1800 at Calverley, Yorkshire and died on 12 January 1830. (Note : The parish records of St Peter, Leeds show a marriage between John Bywater and Elizabeth Grimshaw on 17 September 1828. John’s occupation is shown as warehouseman!)

John remarried to Elizabeth, born about 1806 in Swinefleet, Yorkshire. They had two children identified in census returns.

After his enforced superannuation due to poor health, John tried his hand at farming. His inexperience and poor health combined to result in failure of that venture.