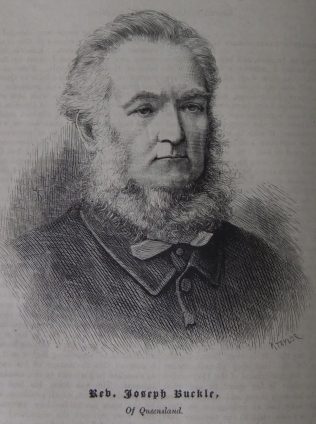 Joseph was born on 26 March 1830 at Masham, Yorkshire to parents Thomas Buckle and Jane Green. He was baptised on 18 April 1830 at the Wesleyan Chapel, Bedale, Yorkshire. Thomas was a tailor and the 1851 census records Joseph working as a tailor.

In 1857 there occurred the only instance of violent opposition to Primitive Methodism in Scotland. This was at Carfin, a colliery settlement close to Wishaw, with an immigrant Irish Catholic population determined to resist any Primitive Methodist preachers. Joseph Buckle the young missionary told how when he and some supporters went there, a band of ferocious howling Catholics armed with stones, brickbats, and sticks, threatened them. When he had finished preaching, the Primitive Methodists had to run to escape their fury, and were threatened with death if they came back. Undeterred, Buckle and friends went again and again until five or six villagers became Primitive Methodist members at Motherwell. Buckle ended his report to the Primitive Methodist Magazine with a rebuke: ‘Could our brethren in England fully realise our position and prospects, the Scotch stations would have more of their sympathy, instead of this “land of heather and of flood” being looked down upon as scarcely worth a place on our Connexional map.’   Probably feeling he’d had enough of heather and flood, a month or two later he went to a Primitive Methodist mission in Australia.

Joseph arrived in Australia on 19 January 1859 at Melbourne on the ship, Planet.

Joseph was the first Primitive Methodist Minister to arrive in Brisbane.