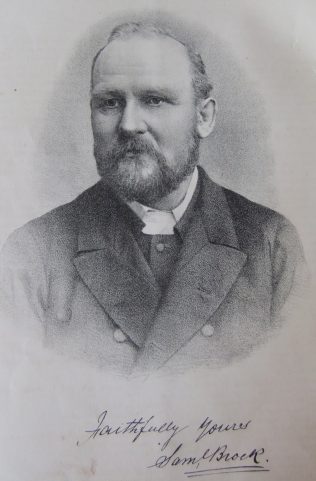 Samuel was born on 16 March 1839 at Barton, Oxfordshire, to parents William Brock and Susannah Pittman. Samuel’s father died when he was very young. The 1851 census shows Susannah as a pauper and Samuel working  as an agricultural labourer.

Samuel was converted aged 16, joined the Primitive Methodist Church and sought to be useful.

Samuel’s obituary records that Samuel was a genuine Christian, an able and earnest minister, a diligent pastor, a faithful friend, a devoted husband, an affectionate father and an enthusiastic evangelist.

Samuel’s son, Fred, writes: ‘In our home there was always an atmosphere of religion. Before we went to school in our younger days there was always a chapter read and a prayer for the day. No father ever desired more that his children should grow up to be Christians and Primitive Methodists. His letters in later life were always replete with good counsel and advice.’