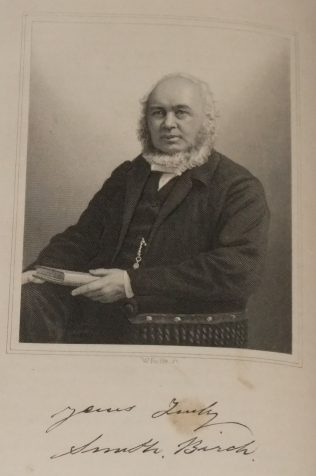 Smith was born on 5 March 1823 at Tadcaster, Yorkshire to parents Richard and Mary.  Richard was a tailor.

His parents were both Primitive Methodists and his father was a local preacher, often hosting visiting preachers. Johnny Oxtoby visited often. Smith wrote in later years; ‘Oxtoby used to put his hands on my head, and pray to God to bless me, and predicted I should be a preacher of the Gospel.’

Smith attended Sunday School as a scholar and later a teacher until he began his travelling ministry. He attended day school in the village and was a pupil at grammar school.

He gave himself to Christ when he was 16 years old. He became a local preacher and class leader when he was 18 and became ’very useful and successful’.

Smith was prompted by Henry Knowles to offer for the ministry and on 20 May 1847 he left home for his first appointment to Ripon.

His obituary records that Brother Birch was a faithful minister of the Gospel; God gave him a good ringing voice, a fine constitution, a cheerful disposition, and a happy soul. He was a man of uprightness and integrity, true as a friend, conscientious, faithful and constant in the discharge of his duties. In pastoral work he excelled, and was known in the homes of the people as a familiar friend.

C G Honor writes; ‘His plain, energetic preaching, his rare conversational powers, and his cheerful piety, secured him a large share of the affections of our people.

Smith represented his District at Conference on several occasions.

Smith married Rachel Douglass (1820-1871), nee Vasey, the widow of Francis Douglass, in the summer of 1863 at Worksop, Nottinghamshire. Census returns identify one child.