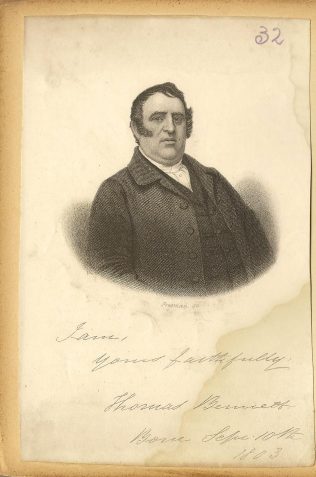 Thomas was born on 10 September 1803 at Little Hulton, Lancashire. His parents were Samuel and Sarah.

Kendal records that the Norwich circuit was struggling in 1829 with 129 members and 1 preacher. The conference of 1831 resolved to place the Rose Yard Chapel into the hands of the Hull circuit. ‘ In June, 1831, David Beattie was sent as a missionary, and in September he was asked if there was room for another. Six months he laboured at Rose Yard, and was succeeded by Thomas Bennett. In 1832, Norwich reported 533 members, and the tide had turned.’

Petty records the growth in the Patrington branch of the Hull second circuit when Thomas took charge in 1856. Along with the ‘zealous assistance’ of Mr Henry Clark the branch rose to prosperity. March 1859 it reported 319 members, an increase of fifty for the year and being able to meet its own expenses it was then made into a separate circuit.

Thomas married Hannah Black (1810-1886) on 18 February 1843 at Lakenham, Norfolk. Census records indicate that Hannah and her mother were born in London.

J Petty, The History of the Primitive Methodist Connexion, 1880, p503