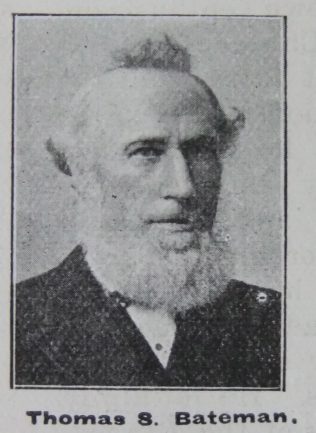 Thomas was born on the 4 November 1842 in Chorley, nr Wrenbury, Cheshire. He was the son of Thomas Bateman , a local preacher from Wrenbury, who was the President of the PM Conference in 1857 and1867.

Thomas was converted early in his life and was speaking in public when aged 14.

His obituary records that Thomas was a man of strong convictions and deep sincerity, loyal to duty, generous and sympathetic, ever the Christian gentleman, and worthy of the honoured name he bore.

He had exceptional business qualities, a clear judgement, a shrewd appreciation of men and things.

As a preacher he was highly esteemed. All his wide reading he made to contribute to the efficiency of his ministry. he stood in the old paths. He faithfully declared the great doctrines of the evangelical faith.

Thomas served as District Building Committee Secretary for many years whilst residing at Dudley.

William Leary, Directory of Primitive Methodist Ministers and their Circuits, 1990