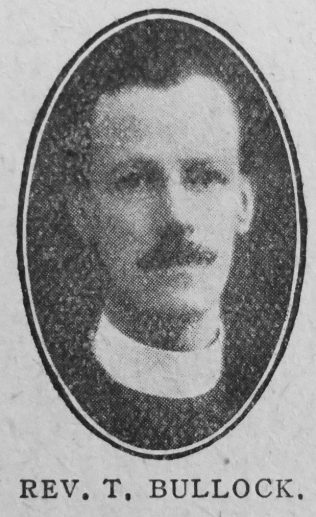 THOMAS BULLOCK: born at Nantwich, Cheshire, in 1882. He was trained at Hartley College and entered the Primitive Methodist Ministry in 1906, serving in Sheffield, Leigh, Oldham, Hull, Bridlington, Leicester, Durham, Gateshead and finally Crewe, where he settled as a supernumerary in 1951 and for three years ministered to the sick and dying as Hospital Chaplain. His diligent study of the Scriptures and his other extensive reading made his preaching most effective and equipped him to share in the joys and the sorrows of his people. His sincere appreciation encouraged many young people in the Christian Faith, and it seemed only natural that he should become associated with the Christian Endeavour Union as Connexional Secretary (1925-30) and as President of the British Christian Endeavour Council. He was also a member of the Board of Directors of the Methodist Holiday Homes Ltd. He spared neither time nor energy in doing the work to which he had been called, and he served his Church and people with utter self-abandonment. He poured graciousness and faithfulness into everything he did, and from his example many caught a glimpse of Him whom he served. During his retirement his regularity at worship and devotional participation in it inspired other preachers. He loved to hear the Gospel expounded and to advise from the wealth of his knowledge and experience. All who knew him thanked God for the efficiency of his service and his kindness. He died on 18 January 1962 in the eightieth year of his age and the fifty-sixth of his ministry.

Thomas was born in 1882 at Nantwich, Cheshire, to parents James and Martha. James worked for a tailor (1901).

Before entering the ministry, Thomas was a solicitor’s clerk.