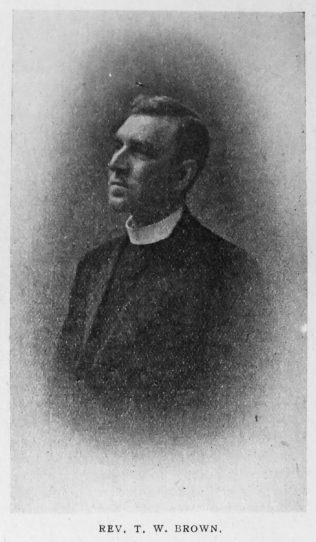 THOMAS WILLIAM BROWN: born at Owston Ferry, Lincolnshire, in 1887. He was brought up in the Primitive Methodist Church, where his father and mother were officials of the Society. While working on his father’s farm he heard the call to the Ministry. He was first a lay agent, and in 1912 became a student at Hartley College, Manchester. In 1914 he began probation, three years of which were spent in the Abergavenny Circuit. In all his circuits he rendered faithful and fruitful work. While in the South Wales District he took an active part in the administrative work and served as Orphanage Secretary, later as Building Secretary, while in 1930 he was the General Committee Delegate of the Synod at Hereford. But the work he loved most was that of preaching the Gospel. This he did with the fullness of his powers, and with great acceptance and blessing to the people. Frequently did he say to his ministerial friends during his long illness:  ‘How I miss my preaching, oh, if I could only preach again!’ He was a conscientious and consecrated servant of Jesus Christ and His Church, and a true and faithful friend. After some years of pain and weakness – the seeds of which were sown by the air-raids during his ministry in Hull – he passed peacefully away at Abergavenny on 16th April 1950, aged sixty-three years, in the thirty-sixth year of his ministry.

Thomas was born in 1887 at Owston Ferry, Lincolnshire, parents Thomas Westoby Brown and Betsy. Thomas, senior, was a farmer.