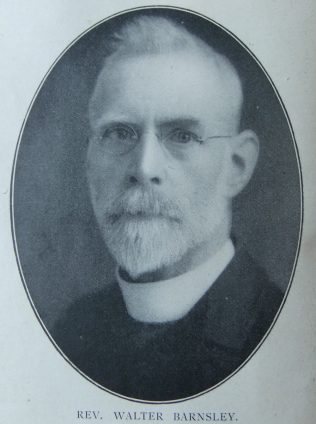 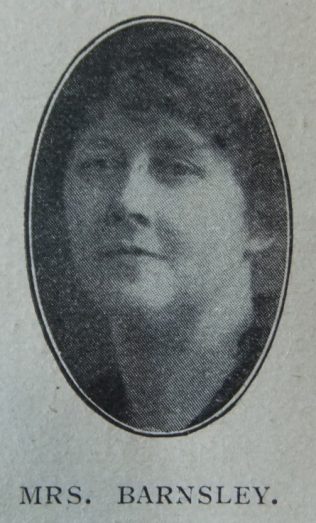 Walter was born in 1873 at Rawmarsh, Yorkshire, to parents Isaac Rains Barnsley and Priscilla Watts. Isaac was a PM Minister. Priscilla, a daughter of Rev William Watts, was baptised by Hugh Bourne.

After receiving a good education, for eight years Walter was a clerk in the Midland Railway Goods Offices at Burton-on-Trent.

Walter gave his life to God when eight years old. At sixteen he began to preach and at twenty became a hired local preacher at Nottingham, where he attended classes in Greek, French and other subjects at the University.

Walter took a firm stand against the iniquitous Education Act of 1902, and suffered imprisonment ten times as a Passive Resister. (Follow the link to a newspaper article about his imprisonment.)

During his ministry at Jersey, Walter felt an irresistible call to Y.M.C.A. work among the troops in France, in which sphere he won immediate and conspicuous success. After a concert by the Lena Ashwell Concert Party in his ‘Hut’ on the Somme, the car containing the artistes, in the pitchy darkness, ran into the river. Hearing their screams, Walter rushed down to the river and plunged into the icy cold water in an heroic endeavour to rescue his drowning friends. Two lives were lost, but the rest were saved. The shock and exposure, however, proved almost fatal to him, and for many months he lay in a half-paralysed condition in hospitals in France and England.

Some of his best work was done when he was a supernumerary, and most especially in Leicester, where from 1933 to 1946 he held many chaplaincies and preached regularly in all the Free Churches.

Walter was a man of many gifts and of wide interest. He was a Fellow of the Royal geographical Society and at one time was a representative of the Free Church Touring Guild of Switzerland. He was an acclaimed lecturer on people and places. He had a sense of humour, which made him a delight to listen to and endeared him to all.

But above all else he was a ‘Servant of the Word’. He preached for a total of sixty-nine years. To the end he was most diligent in preparation and his sermons were the Truth of God vividly made simple for all to understand and appreciate.

Walter married Carrie Potts (1875-1963) in the summer of 1900 at Burton-on-Trent, Staffordshire. Carrie was daughter of William Potts of Burton-on-Trent. Census returns identify one child.