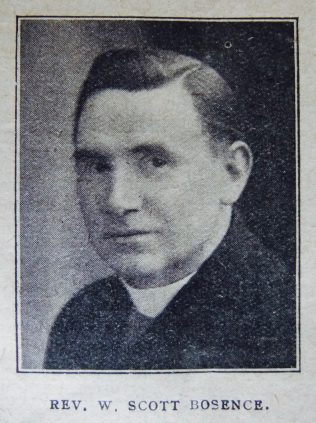 The Rev. W. Scott Bosence is one of those happy men possessing the secret of attraction for the young. It is true that he is young himself and will always remain young, for years have little to do with age, and he fosters the youth that is in him by serving youth that is about him. But such service is always illumined. It is not a catering to the sporting instinct, or a forgetting of the things that matter most. An all round man himself, Mr. Bosence seeks to mould others after the spacious fashion that he has set for himself.

Mr. Bosence is a Cornishman, and is typical of the county at its best. He had a great beginning, for his father was a powerful official in the Penzance Circuit, holding the positions of Sunday-school superintendent, trust treasurer and Circuit Steward; and his mother was a saint. The Rev. Samuel Bryant was the means of his conversion, and with characteristic zeal he set to work. One is often struck in reading the life story of our ministers by the way in which they had to work. Mr. Bosence is but another illustration. Business claimed him until seven; he taught shorthand some evenings until nine; he gained ninety per cent. of marks in his entrance examination and was third on the list. As can readily be understood this was achieved only by scorning delights and living laborious days – and nights.

Such a start sets a pace that is difficult, and, unless everything is carefully watched, killing. A year as hired local preacher at Chesterfield was followed by three years at Hartley College, and probation at Leicester was starred by the building of a chapel at Catherine Street. This excellent beginning was followed by a term at Bath, which saw a gracious revival and the doubling of the membership of the Circuit. At Oakengates and Wellington, his next sphere, Mr. Bosence rebuilt the church at Ketley Bank, and erected a new one at Shifnal. Cardiff came next, where this incorrigible optimist became president of the Cardiff and District C.E. Union and played an important part in Welsh Endeavour.

The war years were spent at Scarborough, and during that period Scarborough suffered heavily. A man needed to be a Mark Tapley to keep his own spirits high, and something more than Mark Tapley possessed to maintain high spirits in others; but for five years this was done in the church at St. John’s Road, and two stained glass memorial windows remain as a tribute to the men who served their country, and a reminder of the man who stayed by the staff at home. Such devotion exacted its penalty and after two years at Blackburn, Mr. Bosence had to seek a warmer climate. Eastbourne needed such a man, and is responding most encouragingly to his ministrations.

WALTER SCOTT BOSENCE: born at Penzance in 1876. As a local preacher he conducted evangelistic missions, becoming a Lay Agent at Chesterfield prior to entering the Primitive Methodist Ministry. After training at Hartley Victoria College and serving his probation in Leicester he exercised a gracious ministry in Cardiff, Oakengates, Scarborough, Blackburn, Eastbourne, Hull, York, and Ripon. Retirement in 1939 took him to York, Eastbourne, Totnes, and Preston. He was a popular preacher and in his early days in demand as a speaker for the cause of Temperance and the Liberal movement. His sermons were well prepared and delivered. Links with Rotary and similar organizations enabled him to the support of men outside the Church. His business ability was devoted to the service of his Circuits where several building schemes were brought to a successful conclusion. He shared in District administration and Free Church Council work, being General Committee delegate on several occasions in the Primitive Methodist Church and representing his District in this capacity at the Uniting Conference. His interest in young people was revealed in his work for Christian Endeavour. Gracious and kind, with a strong sense of humour, he sustained to the end his interest in people and the Church, a true Christian Minister. He passed peacefully home to God on 19 May 1959 in the eighty-fourth year of his age and the fifty-ninth of his ministry.

Walter was born abt 1876 at Penzance, Cornwall, to parents Benjamin Bosence and Emblen Scott. Benjamin was a dealer in sheepskins.

The 1891 census identifies Walter as a grocer’s apprentice.