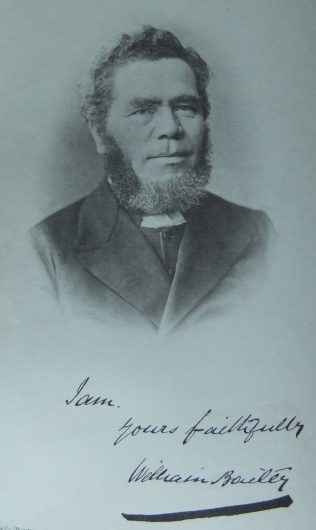 William was born in 1838, a foundling. He was discovered on a step in a very fashionable street of Sunderland, Co Durham. William was taken to the workhouse and given the name of the master of that institution. He remained in the workhouse until he was 12 when he was apprenticed to a Primitive Methodist class leader and started to attend Sunday School.

William began to preach as a boy.

Whilst a local preacher, he enjoyed working in the open-air. The “Latter Day Saints” were troubling the east end of Sunderland with their open air lecturing and William frequently debated with them and gained the esteem of the Christian public for his valour.

William was engaged as a hired local preacher at Barnard Castle at the age of 19.

William’s obituary records that he had the gift of popular and eloquent speech and in his best days could thrill large audiences by his brilliant and fervid utterances.

He took a living interest in social public causes, as was inevitable from his strong humanitarian instincts. In the cause of the Durham miners, he took a vigorous part and was a favourite speaker at several of their great annual demonstrations.