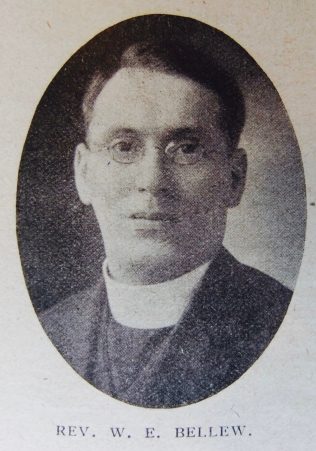 WLLLLAM ERNEST BELLEW: born in South London in 1883. He entered the Primitive Methodist Ministry from the South East London Mission, was trained at Hartley College, and commenced his ministry at Custom House, London, in 1912. He served as a Chaplain with the B.E.F. and was in the bitter Somme campaign of 1916. After spending the greater part of his ministry in the north of England, he served for a term of nearly ten years at Hitchin, where he endeared himself to a wide circle-of friends. As Officiating Chaplain to the Forces and Chaplain to the British Legion, he won the respect of the men by his cheerful and friendly contacts. His devotion to duty knew no limits in his church or in the wider community. His frequent visits to the sick, especially those in hospitals, were greatly appreciated. He found abiding joy and satisfaction in the high calling of the Christian Ministry, and it was hard for him to relinquish the task to which he was so fully devoted. He passed away on 5th February 1945, at the age of sixty-one, in the thirty-third year of his ministry. He is gratefully remembered as a most helpful preacher, a faithful friend, and devoted minister.

William was born on 24 October 1883 at Southwark, London, to parents Edward William Rogers Bellew and Mary Hannah. Edward was a public bath attendant in 1911.

William worked as a railway clerk before entering the ministry (1901).

William married Jennie Smith (1889-1980) in late 1921 in the Hexham Registration District, Northumberland. The 1933 ‘Who’s Who in Methodism’ identifies that they had one daughter.