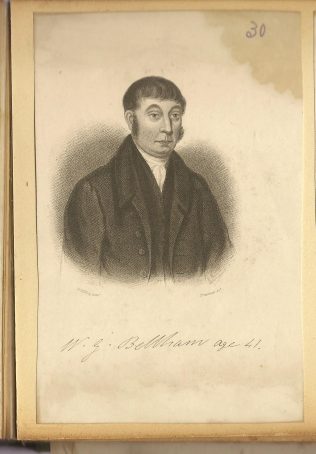 William was born on 24 March 1797 at Lynn Regis. He served a seven year apprenticeship as a shipwright before becoming a minister.

Ritter writes; ‘At Daventry, W G Bellham was greeted with cries of: “No bacon preachers!” “Church and King forever!” He was seized by the mob, and still clinging to the chair on which he had stood up to preach, he was carried up the street and back again. The a group of men “Jonathan Barneyed” him, as a couple of costermongers roll oranges backward and forward in a bag. All his efforts to get out of the circle were in vain, and at last he was so battered and hustled that he fell, and fully expected to be trodden to death by his tormenters. But he was singularly preserved, and escaped with the loss of his hat and one lap of his coat.’

Petty relates that William assisted with the first camp-meeting held in Oxfordshire in May 1825. William also had a difficult time preaching in Oxford outside the walls of the city prison. Students took great delight in throwing eggs and stones.

The conference of 1825 appointed William to the Lynn circuit. William visited Litcham for the first time on 27 July 1825. In the course of conducting worship he had a run in with the local clergyman, which resulted in William being imprisoned and brought before the magistrates. Petty relates the extensive exchange in full, sufficient to say that William argues his way out of further punishment and makes the magistrate and clergyman look rather stupid.

Oliver Jackson, The spiritual hero, or the life of Mr. Wm. Green Bellham, one of the pioneers or early ministers of the Primitive Methodist Connexion. , pub 1858