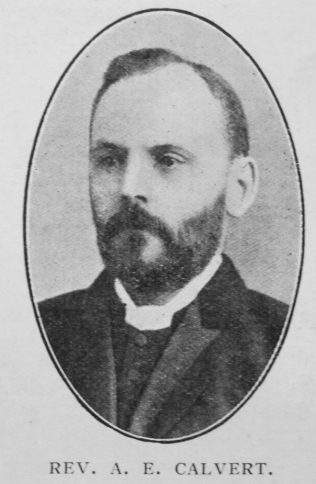 Transcription of obituary published in the Minutes of Conference by P.W.B. Oliver

Alfred E. Calvert was born at Hereford, May 4th, 1861, and passed away—after a very brief illness—on April 5th, 1932. He belonged to a family which occupied an honourable position in our Church, and the influences of a Christian home helped to make his robust Christian manhood. His father, Mr. Thomas Calvert, who died two years before our brother entered the ministry, was a man of fine character and in his early years was himself in our ministry, and later, as a layman, continued to render good service to the Church. His mother was a saintly woman who was brought to a knowledge of God in early life. She loved the means of grace and was helpful in class-meeting and prayer-meeting. The chief sphere of her ministry was, however, the home, where she was greatly blessed and had the joy of seeing all her children brought into fellowship with our Church.

Alfred was the youngest member of the family, and there is little wonder that, with his heritage, there should come the call to the ministry of his Church. He was received by the Conference of 1883, and spent his probation in the Bristol District. His subsequent Circuits were Driffield, London (Caledonian Road), Bristol First (a second term), Lowestoft, Norwich I., Great Yarmouth (six years), Sheringham and Holt, Norwich II., London (Holloway), London (Camden Town) (eight years), returning to Lowestoft, when he superannuated in 1926. In all his Circuits he had a fine record, but the outstanding period of his ministry was his twenty-one years on East Anglia. This was recognised by the Norwich District Committee, that on his death, expressed in a resolution, the high regard in which he was held personally and its great appreciation of his work as a Circuit Minister and District official.

On retiring from the active ministry Mr. Calvert accepted the Pastoral Charge of Westcliffe and Leigh Churches in the Southend-on-Sea Circuit, and here rendered conspicuous service in a difficult situation. He took full Circuit duty, preaching regularly in all the churches. He was also active in outside work, especially Temperance, being well known for his effective opposition to the schemes of “the trade” at the Licensing Sessions.

The end came unexpectedly. He had been busily engaged in preparation for the District Synod to be held at Westcliffe, and was looking forward to the event eagerly, when, in the midst of his many loved activities, he was stricken with sudden illness.

He was called away to the funeral of his sister at Hereford, on Easter Saturday, and returned home very unwell. But nothing serious was anticipated, and he spoke confidently about taking is work on the following Sunday and attending to some matters of detail in connection with the Synod. On the Saturday, however, it was found necessary to remove him to Rochford Hospital, where a major operation was performed, which he did not long survive. The news of his passing came as a great shock to the many friends by whom he was so much beloved.

Mr. Calvert was privileged to live a full life and to enjoy splendid health. It was never his lot to know the infirmities of age, for he was given physical and mental vigour for service all his days.

Our brother was a man of strong character and possessed gifts above the average. He was a capable administrator and excelled as preacher and pastor. He had his share of District honours and considerable success as a speaker on public questions, but his greatest delight was in the work of a Circuit minister. Though somewhat reserved he was a most friendly brother and his old colleagues write in grateful memory of his helpful comradeship. Broad-minded and charitable, he was fervently evangelical, and preached with certainty the great truths which he had tested and proved in his own experience. He was a faithful and successful minister of Jesus Christ, and there are many who thank God for his ministry.

As the end drew rapidly near his son-in-law, Mr, R.J. Ottaway, whispered to him, “I know whom I have believed,” and to these confident words he calmly signified his assent. He had built his life upon the rock, and his faith could not be shaken.

Prior to the interment in Sutton Road Cemetery, Southend a largely attended funeral service was held in Pleasant Road Church. The Rev. P.W.B. Oliver conducted the service and gave an appreciative address. The Rev. T.B. Caukwell (representing the General Committee) offered prayer, and others taking part were the Revs. E. Barlow, B.A. (Baptist), J.C. Edwards and A.D. Bourne (former colleagues). A number of Free Church ministers were also present.

Mr. Calvert leaves a widow, the companion of forty-five years of happy married life, a son and three daughters, to whom deep sympathy goes out in their great sorrow.

Alfred was born on 4 May 1861 at Hereford, to parents Thomas Calvert, a PM minister, and Sarah Watkins.

Before entering the ministry Alfred was a bookseller’s assistant (1881).

He married Janet Carter (1867-1955) in the summer of 1887 in the Clutton Registration District, Somerset. Census returns identify four children.