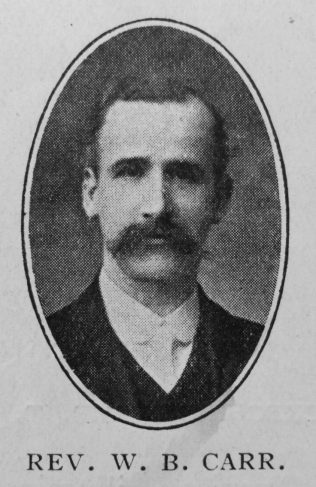 The Circuit Steward of Sileby wrote on December 5th:— “You will be surprised to learn that the Rev. W. B. Carr passed away at 4.50 p.m. yesterday.” We were indeed surprised. But a few weeks before we had seen him apparently well and full of hope for his winter’s work; and only a few days before he had been elected to the presidency of the local Free Church Council. In the prime of life, in the midst of vigorous work, while still eager for the prosperity of his circuit, and sensitive to the imperatives of duty, he is called to the higher service. His former ministry in Sileby had endeared him to the people, and keen were the expectations for his second term. The expectant Church, the beloved family, are suddenly smitten with sore bereavement. As from the sunlight of noon to the shadow of death they pass.

W. B. Carr passed to the Father’s house December 4th, 1913, in the forty-fourth year of his age and the twentieth of his ministry. The interment took place at Wakefield, Tuesday, December 8th. It was conducted by the Rev. G. Parkin, B.D., assisted by the Rev. N.M. Cuthbert. The various committees of the Leeds District were represented by the Revs. T. Whitehead, R.B. Auty, B.A. Barber and E. Barrett. Deputations were present from the Manchester Twelfth Circuit, on which he laboured immediately before going to Sileby; and our Wakefield churches were represented by many who knew Mr. Carr before he entered the ministry. The first service was held in the Sileby Chapel, conducted by the Rev. J.T. Ecob, assisted by the Revs. J.T. Gooderidge, G.P. Clarke, J. Whittle, W. Carrier, W. Hughes, T. Sowerby. The Connexional committees, local churches and neighbouring circuits were represented. The tokens of respect by the general public were many.

W.B. Carr was born at Wakefield. His parents were noted for high probity and exemplary Christian deportment. He began his life in the atmosphere of worship. It is significant that he was named Bramwell after one of Wesley’s ablest, most beloved coadjutors, William Bramwell of immortal memory. He was veritably a son of the tabernacle. His were the spirit of devoutness, spirit of restraint, spirit of heroism, ever the fruits of early response to the influences of the tabernacle. Educated at the Collegiate College, Wakefield. he early graduated for the work of the ministry. The vision of early days never faded. The purpose inspired in youth was ever resolute. The ideals ministered in the worshipping home were abiding. His was a strenuous effort to translate them into the actualities of life. Kind, genial, amiable, loving, he was yet serious and stern, as if there entered into his composition the blood of the old Vikings.

The Rev. G. Bell, one of his earliest superintendents, said, “A more devoted, faithful colleague I never had. He was a manly man; in business painstaking and thorough; a courageous and resourceful worker; a student methodical and constant, as the carefully indexed and analysed volumes of his well-stocked library evidence. His preaching was characterised by thought of transparent clearness, fervour of positive experience, authority as of God’s Word. He did not deal with speculative or disputative questions. With him Gospel was not simply a dogma. It was the rich, full life of Christ in you. He had a phenomenal way of attracting young people to his standard; the youth of the villages he shepherded. A far distant village C.E. Society sent a deputation to his funeral who witnessed that conversions sealed his ministry in the remote villages. His organising ability was considerable. It was his joy to initiate and carry through successfully many schemes for debt reduction and new buildings.

In Liverpool he won highest eulogiums as secretary to the Passive Resistance League. For  “conscience sake” he suffered seven days’ imprisonment in Ipswich gaol. At the demonstration of welcome at Clacton-on-Sea he said, “It was not a matter of concern whether his action was approved or not. He had simply done his duty.’’

He travelled at Wickhambrook, York, Liverpool, Hull, Nottingham, Clacton-on-Sea, and twice at Sileby. Wherever he went he left a good record. To the last he was anxious about his work. The atmosphere of worship pervaded his room. It were as though he were still in the tabernacle. The names of departed loved ones were on his lips as if in glad recognition. His favourite hymn was repeated, “Just as I am.” He was abundantly sustained by the faith for which he had contended. His home life was most happy. Mrs. Carr was a helpmeet indeed. Two beautiful girls are fatherless. The ways of God are inscrutable, but He doeth all things well. Surely our brother still serveth.

“Jesus, Thou Prince of Life,
Thy chosen cannot die;
Like Thee they conquer in the strife,
To reign with Thee on high.”

Bramwell was born in 1869 at Sharlston, Wakefield, Yorkshire, to parents William, a grocer, and Eliza.