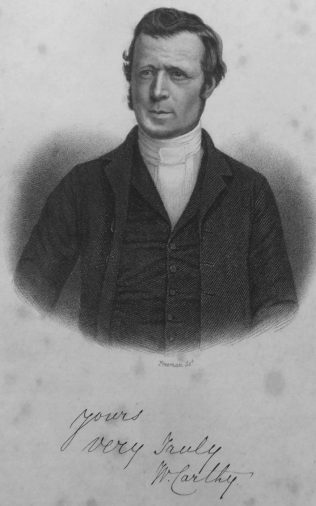 WILLIAM CARTHY was born at Alrewas, Staffordshire, in 1805. He was converted through the labours of the Rev. Sampson Turner about the year 1820. In 1822 he became‘a local preacher, and in 1824 he was taken out to travel. He served the Lord and the Connexion laboriously, was a zealous and persevering minister of the Gospel of Christ, and an unflinching advocate of right and justice. He enjoyed generally excellent health, but for months before his death he frequently complained of being unusually weary after his labour of the day. At length he was attacked by fever, and his physical system being too much exhausted was unable to sustain the shock; he therefore sank beneath its power, and died October 12th, 1861, testifying of the presence and support of his Redeemer in the last and final hour.

William was baptised on 6 May 1804 at Alrewas, Staffordshire, with his twin sister, Hannah. His parents were Charles and Hannah.