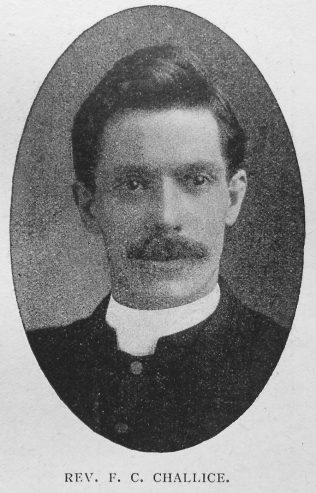 The passing of the Rev. F.C. Challice means a distinct loss to Primitive Methodism. His ministry was comparatively brief, but eminently successful.

Born at Newmarket on 23rd December, 1874, he was nurtured in a godly home. His parents were practically life-long Primitive Methodists. Apart from the home, early religious impressions were developed by the Rev. Nathaniel Boocock. In 1891 he took a definite stand for Christ under the ministry of the Revs. C.H. Lightfoot and W. Sutton. The following year saw him beginning as a preacher, and in 1893 the Rev. G. Baldwin received him on to “full plan.” Removing to Rochester that same year, a sermon by the Rev. James Travis produced a powerful impression and induced desires for consecration to the fuller ministerial life. Mr. Challice was employed on the Newmarket Circuit for a time to fill a ministerial vacancy. Later he removed to Sleaford as H.L.P. under the Rev. J.W. Cotton. It was there he met Miss G. Butler, who, later became his devoted wife. After a definite call to set himself apart for the work of God, Mr. Challice entered the ministry with the Revs. E.W. Smith and A. Marshall. Successful years were spent at Burslem, Dover and Deal (Folkestone, after division), Manchester IV., Norwich I., Middlesbrough, Sleaford, and Thetford. On the latter station he suffered a nervous breakdown but recovered after a year’s rest. Then he went to Risca, appointed by the Conference of 1922. Eye trouble eventually occasioned blindness. Permanent superannuation followed, and eventually Mr. Challice came to reside in Newmarket. Years of over-strain told upon him, and at the close of 1924 he passed into the Homeland. To visit him in his affliction was a means of grace.

His patience was exemplary; his gratitude, marvellous. The memory of Mr. Challice Is refreshing. “Servant of God, well done!”

The funeral service was held in Granby Street Church, Newmarket, conducted by the Rev. W.H. Lawson, a life-long friend. The Rev. W.H. Curtis represented the General Committee. The Revs. J.H. Saxton, T. Featherstone and E. F. McLean, with representative laymen were also present. The memorial sermon was preached by the Rev. W.H. Lawson. A large number gathered to pay their tribute of respect to one who endeared himself to all hearts.

The fragrance of that saintly and successful life will prove a benediction to the widow and relatives as they continue the good work for their Master. To Him we commend them in our prayers.

Claude was born on 23 December 1874 at Newmarket, Cambridgeshire, to parents Matthew, a coal merchant & chimney sweep (1881), and Sarah.