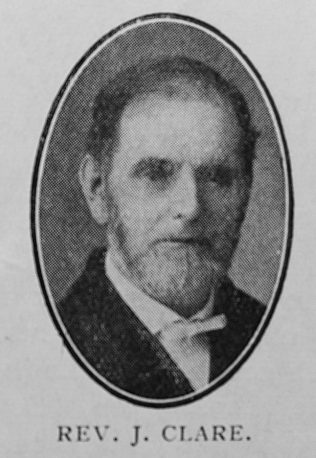 Transcription of obituary published in the Primitive Methodist Magazine by W.D.

Rev. John Clare died at Oswestry December 27th, 1912. He was born at Lyde in Shropshire in the year 1836, and had the advantages of a genuine Christian training. His mother was one of “God’s elect,” and the days of his youth and early manhood were spent in an atmosphere of happy and healthy life. It was a fine start for a young fellow who was ultimately to become a minister to be brought up in a home where ministers had such a hearty welcome, and where so much was thought of the service and worship of God. He entered the ministry in answer to a clear call. This he did at great material cost, since other arrangements had already been made for him which were full of promise. In making his choice he sought the divine guidance with great-anxiety and concern, and when he was quite satisfied as to what he ought to do he went forth unhesitatingly, “counting all things but loss” for the sake of Christ. He was very fortunate in having as his first superintendents men of exceptional influence and strength, Revs. W. Jones and W. Wright, whose kindly interest in their colleagues, as the writer well knows, was worth more than gold.

Our departed brother exercised his ministry in the following Circuits:— Cwm, Weobley, Old Hill, Whitchurch, Macclesfield, Tipton, Minsterley, and Hay, and in every case he left a name of fragrant memory. His devotion to duty, his singleness of eye, his consecrated zeal were beyond praise. His success was largely of the visible and impressive order. He was associated with great revivals, and could tell most wonderful stories of what he used to call “Holy Ghost power.” He had the fervour of the true evangelist and his message was the simple story of the love of God. His work was his delight, his “meat and drink.”

In pastoral visitation he stood almost alone, and in personal and intercessory prayer some who had much to do with him in the busy years speak of him as the most remarkable man they have ever known. Prayer was indeed his “vital breath,” his “native air,” hence he saw visions, and heard voices from afar. He was one of the “humble” to whom the Lord gives special favour that he may “reap the fruit of his doings,” for only eternity will reveal the number of souls brought into the kingdom through his agency. No man ever gave himself more whole-heartedly to w hat he believed to be right, and none was ever more painstaking and conscientious to make “full proof of his ministry.”

He retired in 1904 and came to reside at Oswestry, where he is spoken of by those who knew him intimately as of one of the “excellent of the earth.”

His last illness was very trying, for ten weeks he lay anxiously waiting for the crown. His sufferings were often acute, but he never lost faith in the gospel which had been his pride and boast. He was buried on December 31st, 1912. Friends old and new came together on a very wet day to pay their tribute of respect. Fitting words were spoken by Rev. W. Hall, of Whitchurch, who represented the General Committee. There were also present Revs. W. Dudley, W. Perry, W.H. Mason, and H. T. Griffith (Welsh Calvanistic Methodist).

A largely attended memorial service was held on Sunday evening, January 5th, 1913, conducted by the minister of the church, who had known this faithful servant of the Lord many long years, and been in close touch with him in “cloud and in sunshine” even unto death. The testimony borne on that occasion to the constancy of his trust, the depth of his religious experience, and his general interest in all things good and pure, was sincerely appreciated. We have lost a light to which most of our lights are dim, the influence and appeal of a personality which counts for more than we can say, one whose thoughts were without guile, whose aims were lofty, whose jealousy for the claims and interests of the Church was deep and strong, and whose highest freedom was the captivity of Christ. May our loss be our lesson and may we be equally brave to “labour” in the spirit of sacrifice, and to “wait” in the spirit of the “good hope through grace.’’ We pray for those who are left to mourn; for her who stood by the “loved one gone” to the last, and who will never cease to remember how he always stood by her; and for others who were “near and dear” who will think beautiful thoughts of him until they meet him again in the “heavenly places.”

“They that be wise shall shine as the light and they that turn many to righteousness as the stars for ever.”

John was born in 1836 at Lyde, Worthen, Shropshire, to parents Peter, a farmer, and Eliza.

he married Mary Bennion (1852-1934) in the spring of 1875 in the Whitchurch Registration District, Shropshire.