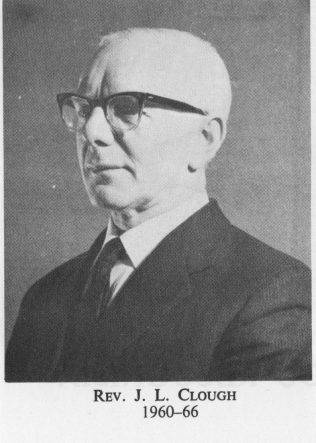 He trained at Hartley Victoria College, representing the College at the Uniting Conference of 1932. In 1933 he was stationed in Scarborough. He then served in the following circuits: Tunbridge Wells, St Leonard’s & Bexhill, Torquay & Paignton, Portsmouth , Gosport & Fareham, Southampton, and Basingstoke, sitting down in 1975. In his ministry he is remembered for his work in building churches both physically in schemes to develop and extend premises and through his powerful preaching. He was proud to be one of ‘Mr Wesley’s Preachers’.

He is also remembered for his caring and compassionate pastoral work and his work with young people. His ministry was marked by a willingness to assert what he believed right, challenging authority, and a compassion for others. He was an avid reader and writer having two books and some poetry published and maintaining a journal covering significant events of the twentieth century from the outbreak of the First World War onwards. He also was a prolific correspondent keeping in touch with his many friends to the last days of his life.

Throughout his active ministry he was ably supported by his late wife, Carola (known as Carol). They were married in Tunbridge Wells in 1938 and the marriage was to last until Carola’s death in 1996. On that date he wrote in his journal, “Our loved ones have gone no further from us than to God. God is nearer to all than breathing.” He is survived by two sons, twelve grandchildren and seventeen great grandchildren. He died on 2 December 2010 in the one hundred and second year of his age and the seventy- eighth year of his ministry.

James was born on 24 September 1909 at Consett, Co. Durham, to parents Richard, a grocer, and Annie.

He married Carola Jeanette Cloke (1911-1996) in the summer of 1938 in the Tonbridge Registration District, Kent. Birth Records identify three children.