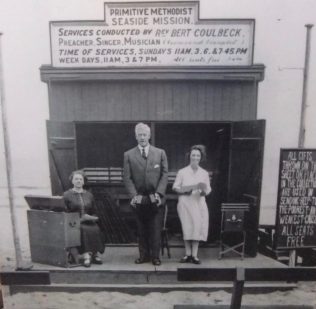 HERBERT COULBECK: born at Cleethorpes in 1876. He entered the Primitive Methodist Ministry in 1905 and was appointed to the Grimsby First Circuit, where his untiring efforts resulted in the building of the Wellington Street Mission Hall. In 1909 he was sent to share the work of the Sheffield Bethel Mission, and it was during this period that his sight began to fail. From Sheffield he went to the Bradford Central Mission in 1914, but within two years he had become completely blind. This tragedy, however, neither cast him down nor closed his active ministry. Towering far above his affliction was his faith and love. He could indeed sing:

‘My heart is full of Christ
And longs its glorious matter to declare.’

And declare it he did. The Primitive Methodist Conference of 1916 appointed him a Connexional Evangelist, an appointment he filled with distinction for fifteen years. Eleven of these years he spent on the sands of his native Cleethorpes, and many will not only remember ‘Bert, the Blind Evangelist, and his Concertina’ but will give unfeigned thanks for him. Failing health compelled him to relinquish the appointment, and he superannuated in 1931. Though he never returned to the full Ministry, yet as soon as his health permitted he was back in harness again and was in great demand by circuits for Mission work. Less than a month before his death he went to Burton Joyce, Nottingham, to conduct special services. There he became a victim of influenza, and bronchial pneumonia set in. At his own request he was brought home to his beloved Cleethorpes, and in the early hours of the morning of 14th April 1949, his eyes, which had been fast closed for thirty years, were opened and he saw the King. ‘When the morning was come, Jesus stood on the shore.’ Thus ‘Bert Coulbeck,’ as he was affectionately known to thousands of adults and children alike, passed to higher service in the forty-fourth year of his ministry and the seventy-third year of his life.

Herbert started his working life as a fisherman, but immediately before entering the ministry, he was a fish buyer (1901).