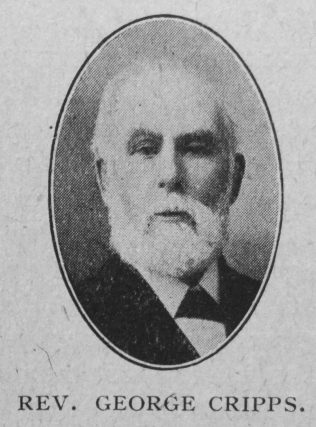 The Rev. George Cripps was born at Badbury, in the parish of Chiseldon, Wilts, on May 2nd, 1839. At the age of fifteen he gave himself to Jesus Christ, and commenced forthwith to work for God, distributing tracts and teaching in the Sunday school. He gave such promise of usefulness that in a few months after his conversion his name appeared on the circuit plan as a local preacher, and soon after he received an invitation from the Faringdon Circuit to accept a wider field of work, and begin the more important duties of a travelling preacher. This he declined, because he felt insufficiently qualified for such a high calling.

After a period of further preparation, involving much thought and prayer, he commenced his life’s work as a minister of the glorious gospel of our Lord and Saviour Jesus Christ in 1861. The Witney Circuit pledged him, and he laboured with considerable success and acceptance on the Sturminster Newton, Faringdon, Andover, Newbury, Basingstoke, Thetford, King’s Lynn, Wangford, Ipswich, Tunbridge Wells and Guildford Circuits.

There were many preaching places on most of these circuits, covering a wide area, and sometimes necessitating a walk of fifteen or sixteen miles each way. Besides the ordinary week-night work, our brother frequently preached three and four times on the Sabbath. He built five chapels and reduced debts on others. It seemed to be his lot to have to grapple with such cases, but with indomitable perseverance and tact, he generally succeeded. At Ipswich, where I first formed his acquaintance, he waited upon a gentleman with the intention of getting financial help, but was unable to see him. He called again—twenty times—before he was granted an interview. The gentleman said: ‘‘I believe you have been before.” Our brother replied that he had called twenty times, and should call again unless he got what he desired. The gentleman bade him sit down, and retired to another room. Presently he brought a cheque for £20—a pound per visit—as a reward for his pertinacity, and, told him whenever he needed help, he could call again.

The same zeal was in evidence for winning souls. Well do I remember as a probationer, the Saturday evening open-air services, with sometimes opposition, sometimes police interference; but if we were moved from one place it was to begin again elsewhere: the singing and exhortations went on, and, we had reason to believe, were made a blessing to souls.

He got the Free Church ministers to join him in a mission in connection with our Rope Walk Church, and as they proceeded down the Rope Walk, headed by a brass band, it was the signal for a tremendous opposition that required the whole of the town’s police, except two, to quell. But not before much damage was done. They smashed the windows of the chapel, brick-ends falling on to the platform, and those who had ventured inside the chapel had to be got out by the back door and through the caretaker’s house. Happily no one was seriously hurt. The windows were boarded up, and the mission proceeded for some weeks, leading ministers and friends of other Churches taking part. The riot was due to a misapprehension that the Salvation Army were beginning their mission in the town, but it turned out for great good, many souls professing conversion.

It was while on the Tunbridge Wells Circuit, under the strain of heavy chapel liabilities, and special services—including mid-day services to men during their dinner hour—that his health broke down. His condition was so serious that his medical adviser ordered a sea voyage to New Zealand on a sailing vessel. In a crisis of this kind, one sometimes discovers that: some of God’s servants have been watching the struggle. It was so in his case. One friend secured his passage, others sent useful presents for his comfort on his voyage, and almost weekly, during an absence of eleven months, never failed to minister to his wife and family. On his return it was found there was very little improvement in his health. The Conference of 1887 stationed him at Guildford, from whence he superannuated in 1892, having travelled thirty-one years. He settled down in Swindon. Though broken in health and a great sufferer, he served nine years on the Swindon Board of Guardians, and preached in nearly all the, Free Churches in the town. His wife, never strong in health, but a great helpmate on his circuits, ideal in the home, hospitable and very kind, predeceased him in 1918. Most of the time after her death he was obliged to remain indoors, and latterly was confined to his room suffering from a complication of diseases—uncomplaining, bright, cheerful and hopeful in spirit, and heartily responsive to prayer and spiritual conversation.

The end came on August 25th, 1920, when, at the age of eighty-one, he peacefully entered into rest. He leaves a family of four, following in the footsteps of their beloved parents, whom we commend to our Father in heaven.

The Rev. Thomas Jackson writes: “I first became acquainted with him about forty years ago, at a mutual friend’s house in London, and soon discovered that our views and sympathy with, evangelistic work in and for Primitive Methodism were similar and emphatic.

“The acquaintance then formed ripened into close friendship. In subsequent years, when he laboured on the Tunbridge Wells and Guildford Stations, I visited him for various services, and on each occasion found his mind occupied with plans for aggressive enterprise, and his soul stirred with a passion to save sinners, and extend the Kingdom of God. He loved to embrace every opportunity for delivering the gospel message in the open air, and his manifest earnestness gained a ready and generally a sympathetic hearing. He had, in those days, a charming voice; fluent, though not rapid, speech; and his powerful pleading with sinners to accept Christ their Redeemer not only revealed the working of deep emotion, but touched hearts that were won to love the Saviour.

“By his devoted attention to pastoral duties, he secured the esteem and affection not only of church members, but of residents in the neighbourhood where our chapels were located. His sympathetic words, invariably accompanied by a brief prayer, made him a welcome visitor to the home, and in cases where special need existed, he secured suitable assistance for the suffering. His devoted labours gained the esteem of friends outside the Connexion, and generously assisted him in his efforts to raise funds for chapel projects.

“He was modest and retiring in his demeanour, was more at home in the work of his station than in attendance upon committees, and in exercises at public gatherings.

“He suffered serious financial loss through the dishonesty of a layman who had won his confidence, but while I knew the hardships and impoverishment that he experienced in consequence, yet I never heard him speak a bitter or vindictive word respecting his injury.

“During the summer of 1919, he spent a fortnight at our Home of Rest at Southend-on-Sea, and was not only refreshed in body and mind, but in spirit also. He took part occasionally in the devotional exercises, and all hearts were touched as he commended the visitors to his Heavenly Father.

“My last interview was expected by us both to be the last we should have on earth, but we cheered each other by the mutual hope of meeting in the Home of Rest ‘not made with hands, eternal in the heavens.’ ”

An impressive service was held on the day of interment in Prospect Place Church, conducted by the Rev. E. Clements, the Rev. J.H. Gavin, B.D. (Presbyterian) and other ministers taking part. The Rev. J. Burton, an old colleague, gave the address.

A goodly number of Free Church ministers and friends assembled to pay their last tribute of respect for the departed, whose remains were laid to rest in the Swindon Cemetery, the Rev. E. Clements conducting, assisted by the Revs. J.W. Hutler and J. Renison.

“Rest from thy labours, rest,
Soul of the just set free;
Blest be thy memory, and blest
Thy bright example be.”

George was born on 2 May 1839 at Badbury, Wiltshire, to parents James, a labourer, and Sarah. He was baptised on 26 May 1839 at Chisledon, Wiltshire.