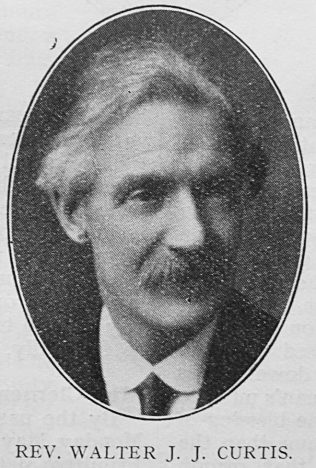 Transcription of obituary published in the Primitive Methodist Magazine by E. McL.

Walter John James Curtis was a wistful soul. His questing eyes were ever peering into the unknown, and he was possessed of a knowledge of the deep things of God which made him in many ways a man apart. That does not mean that he was an aloof man: he was far from being that; he was one of the most companionable and lovable of men, but he brought to his contact with others a quality which made one feel that here was a man who knew his way about in the secret places of the Eternal mind and heart. He made no boast of it, for humility clothed him like a garment. He never sought to confuse others by contrasting his experience with theirs. His instincts were too refined for any such vulgarity. He reached the heart by a road more direct than speech, and the memory of him is more that of an imperishable fragrance than a spoken word. Men who knew him well never quote him for his aphorisms, but they will never cease to love him. There is no greater remembrance than that.

His path toward the goal he reached was not an easy one. Left fatherless at six, such schooling as he could get was materially lessened by a serious affliction of the eyes, and at 13 years of age he joined the ranks of those who must work to earn their daily bread. He was 58 when he died, and possessed one of the most richly furnished minds of any man of his time, and his knowledge of books was a bewildering thing to those whose feet had taken them into busier ways of work. But what teachers he had had! His mother, his sister, his stepfather, his work-mates—not an impressive list judged from the scholar’s point of view—but judged by the standards of character and inspiration, incomparable. They made it possible for the Rev. Arthur Bevan to set the seal upon the preparation, and Hartley College followed.

Walter J. J. Curtis travelled 34 years. With our limited understanding of the Eternal purpose we cry out against so short a term, but who are we that we should? We write down that he “laboured” on Clayton West, Mirfield, High Wycombe, Stratford, Bilston, Burnley II, Horbury, Rotherhithe, Leighton Buzzard and Lavender Hill stations, but what can we record about that ? We can say gladly that his passion for his Master and His work never waned, but strengthened; that he sought earnestly for revivals in his churches, and saw many; that his particular genius lay in winning young people to Christ, and success in that was his greatest joy; and that in every way he could he served his people from the pulpit, in the home, and in the courts of the church, with a devotion that commanded every resource he possessed or could employ. It is easy to write that down. It is impossible for the measure of any man’s mind to estimate what it wrought under the blessing of God, for His glory. No less a volume than the Lamb’s Book of Life can give that record.

Those of us who knew Walter Curtis in his home knew him most truly. No man ever lived in a more charmed circle than that created by his devoted wife and lovely and cultured daughters. He flowered there. Their loss is beyond our measuring, but they have a memory priceless beyond any material wealth. And the one they loved is “at work,” serving God.