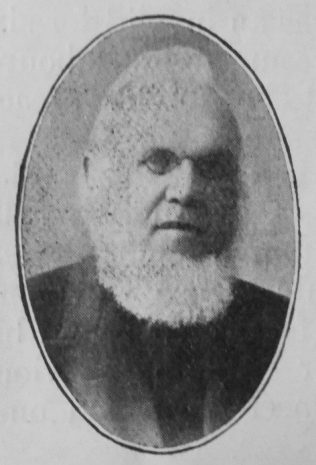 Transcription of obituary published in the Primitive Methodist Magazine by E.S.

Matthew Stacey Cushing was born at Fakenham, Norfolk, December 25th, 1837, and passed into the celestial city December 9th, 1907. The light and shade attending his life, served to bring out conspicuously the sterling qualities of his character. In childhood he breathed the atmosphere of a distinctive Primitive Methodist environment. The very house in which he was born was under the roof of a Primitive Methodist Chapel, and the most frequent guests of that home were the fathers of our Church – including Hugh Bourne himself. Youthhood brought its temptations, and manifested that religion is hardly a matter of heredity, yet early Christian influences could not be lightly flung away. In the battle of the soul they triumphed gloriously. Business associations cast their spell upon the young man’s life, but the love of Christ constrained him, and answering the call of the Church he gave himself diligently to preparation for proclaiming the gospel of the blessed God. His first invitation to join the ranks of the Primitive Methodist ministry was from London, but he shrank from the great city, and ultimately accepted a circuit in his own native county. This was prophetic of his whole career. His humble disposition, and nervous temperament naturally craved retirement to lowly spheres, but force of character and personal gifts singled him out for another destiny.

Buckingham, Stratford-on-Avon, Manchester, Exeter, and Cardiff became the successive scenes of his labour. There he developed those gifts for preaching and administration which are a gracious memory with many to-day.

Here he was brought, thus early, face to face with what to-day would be called the social questions. He had to control mission centres, and by open-air preaching, house to house visitation, he usually gathered a large assembly of the very poor, to whom his presentation of the Gospel was not only arresting but efficacious in winning lives for Christ. The common people heard him gladly, and though he left Cardiff forty years ago, up to recent times testimonies to his varied ministry have been continuous.

After Cardiff he returned to Norfolk, serving first Swaffham Circuit, and then Great Yarmouth. Here he was overtaken by the physical breakdown which heavily shadowed sixteen long years. His suffering was great, but the sympathy he had lavishly given in the course of his active ministry now returned to himself in unstinted me measure,

How the people loved him! He returned to Fakenham, thinking soon to be buried there, but the faint hope that help might be secured at Norwich Hospital caused him to be removed there, and thus arose his fourteen years’ residence in that city. Leaving the hospital, helpless as an infant, he remained in the city, a very great sufferer, “hoping against hope,” for though the best medical attendance within reach was procured, the life and death struggle went drearily on, neither seemed desirable. A bath-chair was called into requisition. The writer remembers the Dereham Road Church presenting such a chair – what a gracious Providence it was! Then. for years the chair, with its stricken occupant, was a familiar object in the streets. After a time Mr. Cushing was able to take occasional services in the city churches. Perched upon a high seat, his fine form would appear – to the uninitiated – to be in a standing posture. Right bravely did he triumph over his weakness and disability, and his powerful discourses – the product of chastened thinking, and a soul in real touch with the Divine Father – had great effect upon his always appreciative audiences. For many years this went on until a most gradual but welcome improvement took place. Finally physical supports were withdrawn, and the sufferer was able to walk.

In 1892 the Conference at Norwich gladly gave him a place again in the active ministry. He then travelled in Thetford, Wells, Rockland, Martham, Norwich II. and King’s Lynn Circuits. This second term in the full ministry was successful and happy. In city, town, and village he was welcomed. Large congregations were thrilled. The small companies were cheered. In the homes of the people he was genial, sympathetic, and in many ways eminently helpful. Experience had stored his mind, and enlarged his heart. He rejoiced in the bonds of service. His circuits prospered under his ministry. His brother ministers and lay officials vied with each other in acts of kindness toward him. He was repeatedly President of District Meetings and ministerial associations. He was delegate to the Burnley Conference in 1896, and to Newcastle Conference in 1903.

In 1906 failing health obliged him to superannuate again, and he accepted the invitation of Lowestoft Circuit to do partial work with Revs. J.C. Mantripp and T.W. Bird, who were exceedingly kind to him. The end, however, was nearing. He was obliged to retire from that sphere after a few months, and returning to his native town he soon took to his bed.

A few days of great pain followed, and then came the peace which He gives to His beloved. His last utterances bore testimony to his humble conquering faith:

“Fixed on this ground will I remain
This anchor shall my soul sustain
Loved with an everlasting love.”

The mists were pierced. The “arms of love” did not fail.

Gracious letters were received from many ministers and other friends, bearing cheering testimony to his worth, which were a real solace to his surviving widow and two sons.

The Rev. W.M. Batterbee, assisted by Rev. A.T. Wardle (as representing the General Committee) and Revs. W.L. Spooner, F.C. France, J. Davidson, I. Ashworth, and G. Brake attended the burial rites, and witnessed his body borne by devout men to its resting place.

He had served the will of God. Championing the village cause he was termed “the rural veteran” at Burnley Conference; but village, town and city had alike profited by his sympathetic labours. The Rev. Robert Hind in the “Conference Chronicle” (see the ALDERSGATE for August, 1908) writes of him: “One of the bravest, brightest souls that ever worked a country circuit, a man whom no difficulty could daunt, and no hardship rob of faith and hope.”

The Rev. A.T. Guttery voiced the truth suitably in his address at the London Conference (1908) when he testified that “Matthew S. Cushing was an invalid for sixteen years, and then resumed his labours, only glad to live that he might preach again.”

Now the preaching is over. The voice is hushed to mortal ears. Memory recalls him, and it is an inspiration to nobler service. The Lord who called him hence will send for us. May we be ready for that time, and beholding the face of our Lord and Saviour Jesus Christ may we meet our loved ones again,

Even so, come, Lord Jesus!

Matthew died on 9 December 1907 in the Walsingham Registration District, Norfolk.