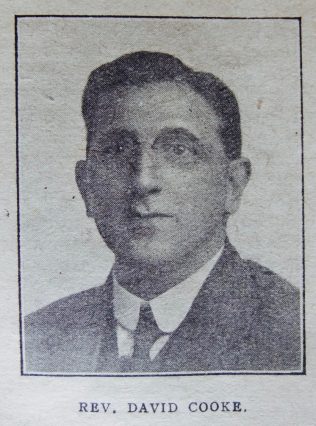 There is an abounding consolation in the thought that though stalwarts pass others are in the making, ready to step forward to bear the burden. God has given to our church a great order of ministers, and our younger men are a worthy succession. David Cooke, of Birmingham, is an outstanding specimen of the type. The son of a Tyneside local preacher, he began to preach when a member of the Low Fell C.E. Society in the Gateshead Second Circuit, and his forceful personality is characterised by the strengths that mark the best in Northern Primitive Methodism. He was trained at Hartley College, and spent his probation on the Leicester First Station, residing at Anstey. In College and on probation “Dave” Cooke won for himself a premier place in the esteem of his contemporaries.

Back to the North.

Cold and true and tender is the North, sang the poet, and there must be something in it that attracts the Northerner for Mr. Cooke hied him back to the Tees, where he paused for two years at Middlesborough before he returned to the Tyne. He served eight years on the North Shields Circuit, five of them as second preacher and three as Superintendent. But like many another Northerner, Mr. Cooke discovered that on the Southern highroads there were great causes worthy of the best, and Sparkhill, Birmingham, is the scene of his present ministry.

Sparkhill, like many another church, has had its difficulties. Mr. Cooke reaped the benefits of the magnificent work done by the Rev. Joseph Pearce, and by the time this sketch appears the debt will be liquidated. Congregations are increasing under this viril ministry which embraces the Secretaryship of the District Candidates’ and League of Nations Committees, the latter making many calls for public advocacy which have been splendidly met. He is pledged to succeed the Rev. A. Lowe, at Derby, whither he goes in 1923, and where again he will find full scope for his fine powers.

DAVID COOKE: born in 1878. He was accepted for the ministry from the Gateshead circuit and entered Hartley College in 1901. His fellow students soon discovered the charm of his nature and gave him a very warm Place in their affection which he kept throughout his ministry. He served his four years’ probation in Leicester, and his later work lay in Middlesbrough, North Shields, Birmingham, Birkenhead, Lytham St Annes, and Leeds. A breakdown in health during his fourth year in Leeds caused his retirement in 1939, after thirty-five years in the active ministry. During this time he served on District Committees of Candidates and Probationers and was for ten years associated with the Primitive Methodist Candidates Examination Committee, during five of which he was Connexional Secretary. Nature and grace conspired to make him a preacher of outstanding merit. He had a good presence, a fine resonant voice, and a strong creative mind. Throughout his life he read widely. A keen student of great books, he was well informed: but he was no mere retailer of the ideas of others. His reading of History, English Literature, Philosophy, and Theology served as food for his thought; but what he taught had been compounded in his own able and critical mind. All who had the privilege of his friendship knew what sound Judgement he had, and how ready and deep was his sympathy with those in trouble and need. He united in his person the culture of the scholar with the consecration of the saint. Socially he was very much at home with people, and at all times he showed himself a fine representative of the Christian ministry. He died on 15th October 1957, in the eightieth year of his age and the fifty-fourth of his ministry.

David was born in 1878 at Lamesley, Co. Durham, to parents Thomas and Mary Ann. Thomas was a coal miner.