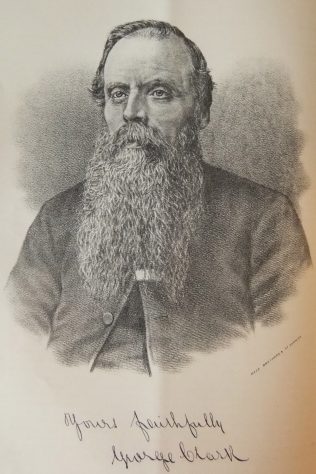 George was born on 12 December 1832 at Baildon, nr Bradford, Yorkshire to parents George Clark and Grace Lister. George was baptised at Baildon Primitive Methodist Chapel on 17 January 1833. George senior was a weaver.

As a child George attended the Wesleyan Sunday School. He was converted aged 13 at the Primitive Methodist chapel at Shipley. Being anxious to avail himself of all the help he could get in the culture of his spiritual life, George attended four class meetings and a band meeting each week.

His family moved to Wilsden when George was 17. There he became Sunday School Superintendent and an assistant class leader.

At the age of 23, George was called out by the Ripon circuit as a hired local preacher, to supply for Rev Thomas Self.

George became the superintendent of the newly formed Chichester station in 1874. Having but one chapel and a few members, the one hope of extending the connexion in that highly conservative neighbourhood where established Church influences and brewing interests were very great, was in vigorous mission work. George commenced an outdoor ministry but an evil spirit of persecution soon became evident. One Monday in September 1874 a great gathering of undisciplined citizens, and some policemen, disrupted attempts to preach in the street. George, his wife, and some colleagues retreated to an enclosed patch of ground that had been bought for a chapel and fenced off. They continued the meeting behind the fence As George was preaching, a heavy missile was thrown over the fence and fell on the shoulder of George’s wife causing her great agony. George and a colleague received a summons on the Wednesday to appear before the magistrates on the Friday on a charge of obstructing the highway. On the Friday the case against George was found to be ‘not proven’, but sadly George’s wife died that evening as a result of her injury leaving behind four young children.

George continued his mission work in Chichester for four years, added to the Church and built three chapels, including one on the site where his wife had died.

George saw a net increase on his stations of 700 during his active ministry. Most of his work was carried out in sparsely populated districts and often in neighbourhoods not at all congenial to Methodism.

In George’s obituary, Rev T H Richards writes: ‘He was a born Home Missionary. He grew strong in opposition, and was not overwhelmed by failure. We have seen him stand for two hours in the midst of a village fair, singing, praying, talking the Gospel as few could under the circumstances, and returning from the scene with a glad heart, though all over bearing the marks of persecution – clothes besmeared, hat bulged, bones sore; but this was the work he enjoyed more than anything else.’