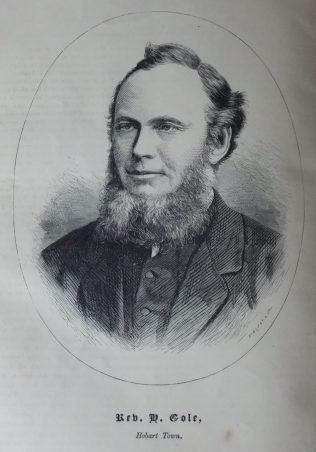 Henry was born on 30 May 1825 at Pinchbeck Fen, Lincolnshire to parents Thomas Cole and Rebecca Jane Cordley. He was baptised on 1 June 1825 at Pinchbeck. His parents were both Primitive Methodists.

Thomas was a farmer, but after a while had to relinquish the farm. As a consequence Henry had to go out to work at an early age, which affected his day school education. He relied heavily on Sunday School for his education.

Henry committed to God when young and was an exhorter on the plan in his teens. He was superintendent of the Sunday School when but a youth. In 1849, Henry became a hired local preacher in the Boston circuit.

Conference appointed Henry to be a missionary to South Australia in 1854. He sailed to Australia on 7 August 1854.

His obituary records that his chief qualities were said to be deep devotion, intense sympathy, unwearied diligence, and fidelity to the connexion, which had their result in a successful ministry.