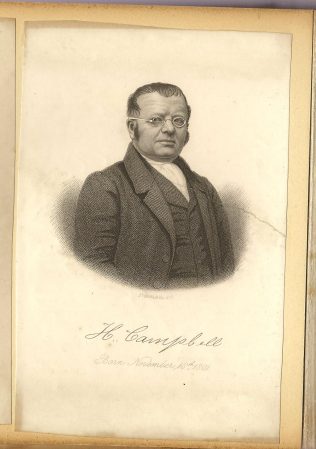 Hugh was born on 18 November 1801 at Seaton, Cumberland, the son of John Campbell and Elizabeth Robinson. (Note: Familysearch.org dates baptism as 14 December 1800)

Kendall records that Hugh is regarded as one of the great chapel-builders of the Hull District, since sixteen chapels and two unfinished ones, besides schools at Louth and minister’s houses at Scotter stand to his credit.

Hugh died on 12 October 1860 at Scarborough as a result of a street accident.

T Greenbury, The Standard Bearer Fallen: Being a Brief Sketch of the Life and Labours of the Rev. Hugh Campbell, 1862