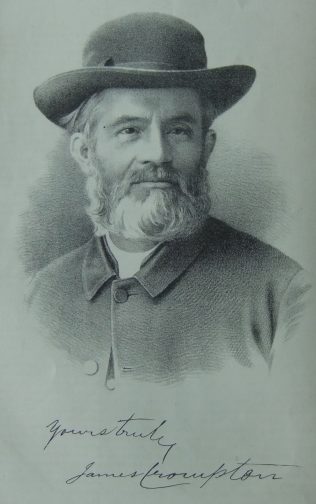 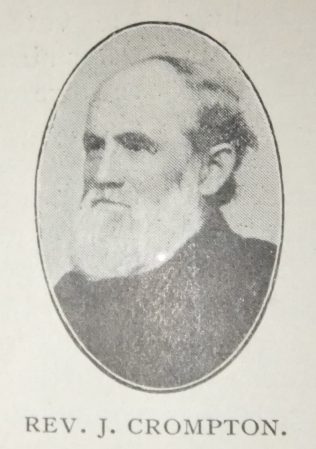 James was born on 29 February 1836 at Moseley Common, nr Walkden, West of Manchester.

His family were originally from Bolton and were related to Samuel Crompton, inventor of ‘The Mule’, a spinning machine.

James mother died when he was 6 and his father when he was 13. His father was a Wesleyan, though he joined the Primitive Methodists shortly after his wife died.

James didn’t have a day school education, but from the age of 10 attended, at different times, three night-schools.

James was converted at the age of 18 and within two years became an acceptable local preacher. He received an invitation into the itinerant ministry at Blackburn in 1858, where James Macpherson was the superintendent.

The 1889 biography relates that James read French fluently and had acquired a knowledge of Hebrew and Greek. James also believed a study of science was important and studied Chemistry and Geology, achieving an advanced certificate by examination in both subjects. He held a certificate for teaching science.

His obituary records that the emphasis of his preaching was the experimental and ethical aspects of Christian life.

Whilst at Darwen in the early 1870’s, James was sent to Preston gaol for holding open-air services in Darwen. After his release he was welcomed back in Darwen by a large crowd and a public meeting was held to congratulate him on his brave stand for freedom of speech.

James was a prolific writer of pamphlets and short stories. He published a book entitled ‘The Bible and the Critics’ in 1906.

After superannuation, James settled in Chester.