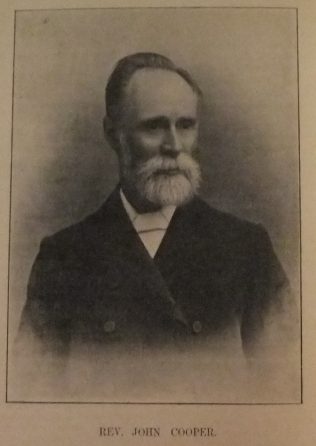 John was born in 1845 at Ettingshall, Staffordshire. His father became a Primitive Methodist shortly after John’s birth.

John was sent out to work at the age of eleven as a foundry where he learned the trade of a moulder.

At the age of six, john started to attend the Camp Street, Wednesbury, Sunday School. He continued his association with the school as scholar, teacher and vice-superintendent until he left home to enter the ministry. His conversion came during a service when Mr John Cook, a local preacher from Willenhall, was preaching. John became a fully accredited preacher when aged eighteen.

In order to improve his education, John attended evening classes.

Most of John’s ministry was spent in his native District.

His obituary records that his gentlemanly bearing, and earnest evangelical preaching, couple with regular and systematic visitation won for him a warm place in the affections of his people. His preaching was expository and evangelical, direct and persuasive, his aim was to win immediate verdicts for his Lord and Master, and many redeemed lives were the crown of his rejoicing.

One of his most treasured memories was that it was under his ministry that Dr A.S Peake was converted and joined the Church.

After superannuation, John moved back to Wem, Shropshire, where he rendered service as a preacher and Sunday School worker. He passed away whilst on a visit to his son at Sutton Coldfield.

John died on 7 March 1930 at Sutton Coldfield, Shropshire. He was buried at Wem, Shropshire.