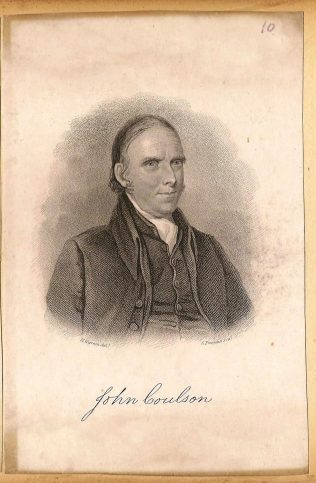 John was born on 14 December 1777 at Calow, nr Chesterfield, Derbyshire. Kendall comments that John was ‘religiously inclined from childhood’.  He was drawn into the revial movement and became one of the preachers of 1819.

John has the honour of being the PM Connexion’s pioneer in Bridlington. Tradition tells that he walked over from Driffield one Saturday afternoon so as to be in time for the close of the market, and that his first service was interrupted by the constable. John also made visits to Flamborough and Filey.

Whilst in Leeds in 1822, John writes in his journal that they opened Bradford, Dewsbury and Otley. He recalls a visit to Bradford where he couldn’t find a place to preach and started outdoors. Afterwards he received a letter from a young man in another denomination that was reaping the benefit of the Primitives efforts because the PMs had no place to worship. Application to a magistrate allowed John to use a building in a street known locally as ‘Devil Street’, because of the behaviour of its inhabitants. It soon became known as ‘Reform Street!

In January 1823, the Leeds circuit sent a mission to London. John walked from Leeds to London arriving on 21 January 1823 with three shillings in his pocket. He wrote to Hugh Bourne; ‘If any place in England wants missionaries, it is London.’ At that stage there was a society of 20 active in London.

Patterson describes John as an ‘enterprising and intrepid missionary’. During his time in the Hexham circuit, John directed the early work of Joseph Spoor.

John was married to Sarah, who died before 1851. Census records show two daughters.