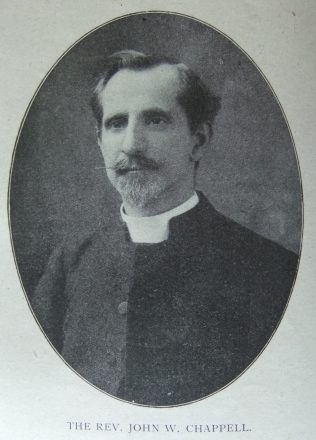 John was born on 29 September 1868 at Leeds, Yorkshire, to parents Samuel and Sarah.

John entered the ministry from Barnsley.

John was associated with a number of building schemes including; a school hall at Withernsea, school premises at the Clowes Memorial Chapel, Burslem, two suburban churches in the Nelson circuit and a church at Motherwell.

John’s obituary records that he was a keen and diligent student, an accomplished linguist, a capable administrator, and faithful pastor. His appointment to various District offices was not only a tribute to his ability, but also to the marked esteem in which he was held by his brethren.

His constructive thinking, lucid expression, extensive reading, and rich experience of the treasures of grace, all contributed to the enrichment of his pulpit ministrations.

He was of generous and kindly disposition.

John married Jane Amelia Hope Holden (1865-1936) in the spring of 1895 at Doncaster, Yorkshire. She was the daughter of Mr Richard W Holden, a deed poll member of Conference. Census returns identify two children.