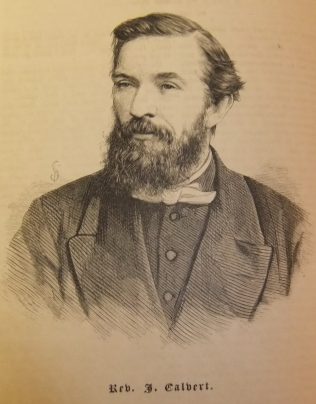 Jonathan was born on 28 February 1833 at Acomb, Yorkshire to parents Jonathan and Dorothy. Jonathan senior worked the land.

The 1851 census records that Jonathan worked the land before entering the ministry.

Jonathan’s obituary records that he had no aloofness about him – he was remarkably approachable – you no sooner came into his presence than you felt at home with him at once.

Jonathan was particularly successful in leadership of the Warrington and Widnes circuit through a critical period.

He was always diligent in his circuit work, earnest and faithful in his preaching, careful and correct in all circuit matters, and friendly with all who came into contact with him.

After superannuation, Jonathan crossed the Atlantic several times to visit his eldest son. Whilst in America he re-married.

Jonathan died on 30 September 1908 at Norfolk, Virginia from pneumonia following an operation. He was buried at Pittsboro, North Carolina alongside his first wife, Elizabeth.