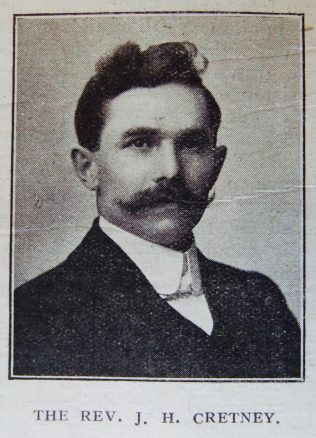 The Rev. J.H. Cretney is one of a family of twelve, all of whom are in the fellowship of our Church, their parents having been cradled in our Church before them, the father being a local preacher of the Douglas Circuit for nearly fifty years. The subject of this sketch was converted in a typical Manx revival at the age of nineteen, and at Bucks Road, Douglas, started his Christian activities. Following the trail made by countless young men seeking wider scope, he removed to Manchester, where he so commended himself that the Quarterly Meeting of the Higher Ardwick Circuit, invited him to prepare for the ministry. A sense of unfitness caused him to decline the call, but its repetition a year later constrained him to respond.

No other minister receives such a variety of training as does a Methodist minister. Think of two years at Horwich on probation at a time of great difficulty! A man is flung in at the deep end, and if he can’t swim he drowns in such experiences as these. And think of Colliery explosions, such as the Maypole at Platt Bridge, or the Pretoria at Atherton, where three hundred and forty-four men lost their lives! Mr. Cretney had to face these disasters, which filled his churches with sorrow, and in such a ministry as was called for, prepared himself for his life-work. And yet he speaks of these nine years on the Leigh and Bolton II. Circuits as very happy years.

Foxhill Bank and Accrington Circuit was the sphere of Mr. Cretney’s labours during the difficult war years. But the policy was an aggressive one, and Smalley Manse was built and furnished at a cost of over a thousand pounds, a church debt of six hundred and fifty pounds was cleared, and a vigorous church life maintained for five years, which still continues. From Accrington Mr. Cretney removed to Lancashire Hill, Stockport II. Circuit, where he feels again the same throb of progressive life. Indeed this is not to be wondered at, for Mr. Cretney is a faithful, devoted servant of his churches, ever seeking to encourage the young life, and to increase the love of God and Church and Connexion in the hearts of all. No part is left unwatched, and missionary income, as well as magazine circulation, claim his interest and prosper under his fostering care. An essentially modest man, no man is more greatly beloved of his people.

JOSEPH HENRY CRETNEY: born at The Braid, Marown, Isle of Man, in 1878. He came of a staunch Primitive Methodist family, and the influence of a godly home counted for much in the moulding of his character and deciding his life’s work. He entered the ministry of the Primitive Methodist Church from the Higher Ardwick Circuit in 1903, and gave himself wholeheartedly to the work to which he had been called. People in the circuits where he travelled soon discerned his disinterested devotion to the work of God. He was a good man, endowed with a native courtesy and a delightful sense of humour. In the pulpit he revealed the culture and charm of a well-furnished mind and a devout spirit. By his ministry he was able to instruct believers and win others to the Christian way of life. He took a diligent interest in the administration of his circuits, all of which benefited by his wise judgement and counsel. District offices were filled, and the duties discharged in a most faithful manner. Young people found in him a real friend and to them he gave great encouragement. Some of his best work was done in the homes of his people, for he was a true pastor. He and Mrs. Cretney were given to hospitality, and there are many who cherish memories of their happy home. He retired from the active ministry in 1945, but served another two years as an active Supernumerary and continued to serve the churches until a few days before his death. He died on 11th April 1949, in his seventy-first year and the forty-sixth year of his ministry. We thank God upon every remembrance of him.

Joseph was born on 24 August 1878 at Marown, Isle of Man, to parents Robert and Margrett. Robert was a blacksmith.

Joseph worked as a draper’s assistant before entering the ministry.

Joseph married Florence Thorpe in the summer of 1919 at Blackburn, Lancashire.