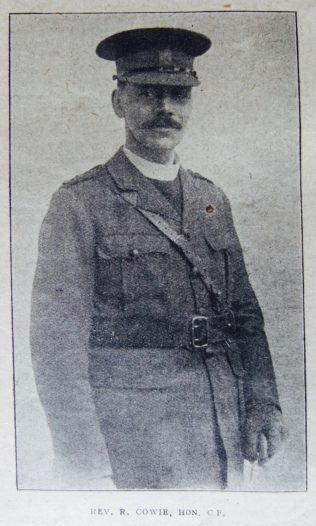 RICHARD COWIE: a native of Hetton-le-Hole, Co. Durham. He entered the Primitive Methodist Ministry from Wallsend-on-Tyne in 1906, receiving his training at Hartley College, Manchester. Mr. Cowie married a daughter of the Rev. John Watson, D.D. Throughout the united circuits he served he was held in high and affectionate esteem, and welcomed by every congregation. He preached with evangelical fervour, and with the deep desire to win his hearers for Christ. His sympathetic and kindly nature was manifested towards all who were in sickness or sorrow, and his steadfast devotion to duty was constantly exemplified. In 1917-18 he served as a Methodist Army Chaplain, rendering efficient service in Egypt and Palestine. He peacefully on sleep, on October 22, 1936, in the fifty-fifth year of his age and the thirty-first of his ministry, leaving behind him a fragrant memory.

Richard was born in 1881 at Hetton- le-Hole, Co. Durham, to parents Edward and Mary. Edward was a coal miner.

The 1901 census identifies that Richard also worked as a coal miner before entering the ministry.