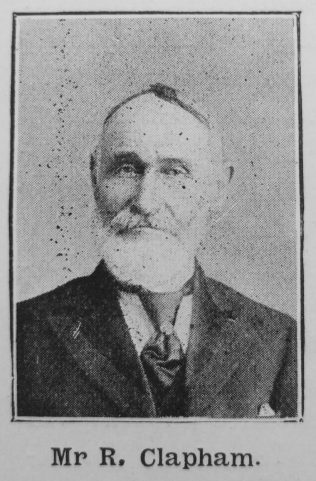 Transcription of Obituary in the Primitive Methodist Magazine by Emerson Phillipson

Mr. Robert Clapham was born March 3rd, 1819 and died December 16th, 1901, aged 82 years. At a glance it will be seen that his life covered an eventful period in our national life, in science, in commerce, and in education. The conditions under which he started life are very much changed, to the advantage of the young life of our age.

Concerning his parents and his earliest years we have little information more than that his education was considered as being above the average. We also learn he was converted when quite young, in the year 1835, and at once identified himself with Primitive Methodism, which was then weak and struggling. At the age of 18 he began to preach, and such was his success that two years after, in the year 1838, his name appeared in the list of ministers as stationed by Conference he being recognised as a minister on probation. For eight years he continued in the ministry of this Church, and during those years suffered great deprivation, and was in labours most abundant.

His own Words in relation to this part of his life, are found in the address he gave at the Conference of 1891, when he addressed it as its Vice-President:- “I have nothing new to say, being an old and well-worn son and servant of the Connexion. My life cannot be otherwise than in its progressive history. My life is in its history. I am proud to say it has a glorious past. Upwards of fifty years ago I spent eight years of the prime of my youth in making some small portion of the history of this good old cause of ours; nothing in this world would have taken me from this noble cause but the want of health.”

It was failing health that led to his resignation as a minister of the Church, but he continued to preach. His son, Mr. J.R. Clapham, says: “My earliest memories of my father’s life revert to the time when he left the ministry and came to live at Yarm, and took a position on the Stockton plan as a local preacher. He was a slave to the Church of his choice. It was quite a common thing for him to walk on a Sunday from Yarm to Hartlepool and return home at night, a distance of 33 miles, and preach twice, and even thrice on the Sunday, and go to his business the following day.”

His name has been before the public (in the north of England in particular) for 64 years as a preacher of the Gospel. He has held every office possible in the Stockton station, and has represented the district in Conference on several occasions. For several years he was Treasurer of the Orphanage for the Darlington and Stockton district, and he also subscribed annually.

It is well known he succeeded in acquiring considerable wealth, but he always regarded himself as God’s steward for years and years. It has been his practice to give a tenth of his income towards religious and charitable purposes, and he found great joy in knowing his example had influenced others. He was very much pleased to receive from Mr. W.P. Hartley, J.P., a letter dated November 8th, 1901, a part of which is given:-
“I feel it my duty to write and tell you that long, long ago your example was an inspiration to me, by enabling me to see the great wisdom of offering some percentage to those causes that I deemed it advisable to assist.”

Our Church has benefited much by his generosity, but the Stockton Station in particular. Towards recent development in that station he has been the largest subscriber. His interest in the Church continued to the last. Not many days before he died he said to the writer, “I can die happy. Stockton Station has come to be what I have long worked and prayed for.”

He has served his generation “according to the will of God.” His work is complete. Nature was tired and sought rest. After a somewhat prolonged affliction, he passed peacefully into rest December 16th, 1901. On December 19th, amid every token of respect, his mortal remains were laid in their last resting place. He had lived over fifty years in Yarm. The blinds were drawn, the town was still, and bore unmistakeable evidence that one of its benefactors was no more. The first part of the burial service was held in the beautiful Primitive Methodist Church at Yarm, conducted by the Rev. E. Phillipson, the following taking part: Rev. W.E. Crombie, of York, and Mr. R. Foster, Vice-President of Conference, who represented the General Committee; also the Revs. W. Johnson, and J.G. Bowran. The service at the grave was read by the Rev. E. Phillipson, superintendent minister. The funeral was attended by a large number of people from near and from far.

Robert was born at Thirsk, Yorkshire.

After leaving the ministry he developed a rope and twine manufacturing business at Yarm, Yorkshire.