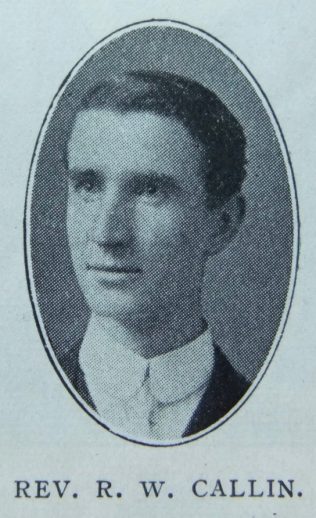 The 1901 census records Robert working as a shipping clerk.

At the at the of sixteen he became a member of the Primitive Methodist Church at Lock Parade, and four years later was accepted for the ministry, entering Hartley College in 1906. During his three years there he served as students’ Secretary.

On leaving College he was sent as a probationer to St. Annes-on-Sea, where he helped to found the Primitive Methodist cause now centred in the King’s Road church. There followed a period at Harrow and one at Grimsby, and it was whilst at Grimsby that was called to serve as a Chaplain to the Forces. From 1916 to 1919 he worked with great devotion, in Belgium and in France. He gave of his many gifts first to the Primitive Methodist and then to the Methodist Church.

He was honoured as Chairman of the District at Bakewell in 1929. After Union he was called to take up the responsibility of Secretary of the newly-formed Chester and Warrington District. In 1946 he was appointed Chairman of the Bradford District, which office he held till his death. He was co-editor of the popular missionary reports for 1931-32 and served on many important Connexional committees, including the Book of Offices Committee, a special committee on ‘A teaching ministry’, the Ministers’ Children’s Fund, etc.

He was a lover of music, and had great knowledge of this subject. He was also a poet, with a remarkable gift of lucid and clear language. Time talents were consecrated to his Master and the Church. His hymn ‘O Lord of every lovely thing ’ has found an honourable place in the Methodist Hymn-book. He himself was a member of the Tunes Committee, also a member of the New Sunday School Hymn-book Committee, and gave hours of his time to sifting material for it. Five of the hymns in that book are from his pen, and one of the tunes. He was a wise  and far-seeing administrator with a thorough grasp of the smallest details, yet with a truly great command of assemblies. As Chairman of the District he was outstanding. He never seemed to be tired by committee work, and the endless detail which such work entailed. Wilfrid Callin’s work was his life. Ever busy in his Master’s business, he was yet unfailingly considerate, brotherly, kind in all his dealings with others. He loved his home, and was as great a Christian gentleman there as he was when leading a Synod or in the Chair of any public meeting. He lad a charm of spirit and radiancy of character which he caught from always companying with his Lord. His gift of language and high sense of worship were marked features of his pulpit ministries. He never did anything shoddily. Above all he was a great brother to his colleagues. His circle of friends was large and many young owe much to his friendship.

Robert married Edith Platt (abt 1891-1961) in the spring of 1920 in the Fylde Registration District, Lancashire. Birth records identify three children.