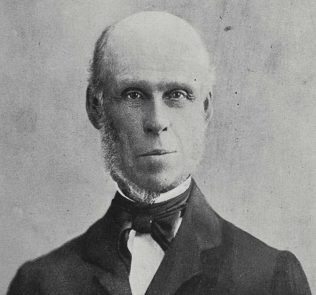 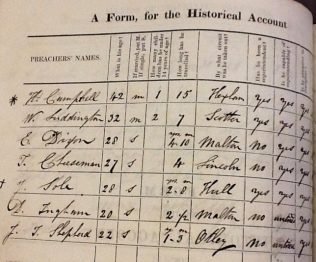 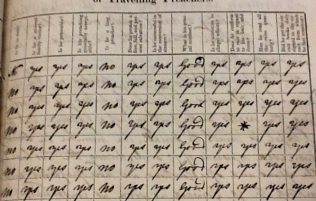 Thomas was born on 4 September 1815 in Tetney, Lincolnshire, the son of Joseph and Ann Cheeseman (nee Robinson).

Ann (1786-1860) was also born in Tetney, which was in the Grimsby circuit.  She was a remarkable woman, who also became a Primitive Methodist local preacher. In 1828 her eldest son ‘a promising youth of 14 years of age, whom she loved with the tenderest affection and regarded as one of her dearest earthly treasures, went with his father to Louth market with the design of purchasing a hymn book, and on his way home he fell from the cart, was run over, and never spoke afterwards.’  His death was ‘almost too much’ for her, but her suffering eventually led to a deepening of her faith.

His mother’s influence led Thomas, and his brother Robinson to become Primitive Methodist ministers. It is said that ‘Towards the ministers she evinced the truest kindness and strong regard, honouring them very highly in love for their work’s sake’.

Thomas was 24 when he became a Travelling Preacher, serving in the following circuits:

Among the records of the Driffield circuit, there is one dating from 1843, that throws a light on the standards that Primitive Methodist ministers were expected to uphold. There were seven ministers in the circuit. Thomas Cheeseman was 27 and single. He has travelled (i.e. been a minister) for 4 years. He was ‘taken out’ from the Lincoln circuit, and although he has not yet been a superintendent minister he is judged to have the abilities for that role.

Several other questions are asked of him, including
‘Is he personable?’ – Yes.
‘Is he a long preacher?’ – No.
‘Is he successful in the conversion of sinners?’ – Yes.
‘What is his general conduct?’ – Good.
‘Does he conform to rule in regard to his hair and dress?’ – *

Thomas is singled out as the only minister not conforming.  A note explains:

* ‘That in consequence of Brother Cheeseman’s hair having fallen off, he puts it on the top of his head, but if the District Meeting decidedly objects to his method, he promises to adhere to Rule. He being subject to take cold in his head.’

It is to be hoped that the District Meeting showed some compassion to the young man whose premature hair loss clearly affected his self confidence.

Hugh Bourne in setting out rules for ministers made sure to say that, like Solomon, they should be administered with an understanding heart.

In 1844 Thomas married Eliza Cawkwell (1816-91) at Sculcoates.  He met Eliza when he was stationed in the Scotter circuit. She lived at Hatfield, near Doncaster, across the county boundary in Yorkshire, which was part of the circuit at that time.

In 1841, at the time of the census, he was lodging with Eliza’s family, who were farmers. He was described as a ‘dissenting minister’.

In 1854, just before William was born, the family emigrated to New Zealand. The newspaper reporting arrivals on 4 April, on board the barque Artemisia, from London, described him as Rev. Thomas Cheeseman. He may have been sent out as a missionary, but instead of serving as an Itinerant Minister, he became a local preacher on the Auckland Mission.

Thomas was described as a farmer and settler, and died at his farm, Remuera, in Auckland on 24 September 1907.

Thanks to Revd Robert Amos for sharing with me the entry in the Driffield circuit records.