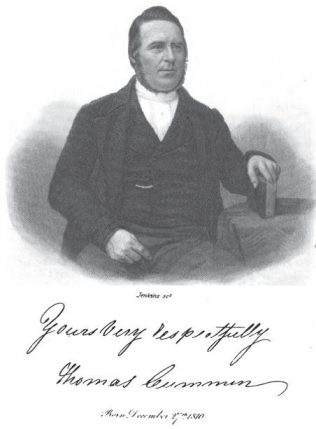 Thomas was converted in 1832 under the preaching of John Ride. He worked for two years as a local preacher and was called to the itinerant ministry by the Shefford Circuit. In his early appointments he worked alongside John Ride, particularly in the area around Reading.

His obituary records: ’His joy was in sermonising and preaching. He was painstaking in preparation for the pulpit, and his sermons were logical, with divisions and sub divisions flowing out of the text, and were fitted to linger in the memory. His manner was impressive, his voice good, and mostly was self-possessed, and conviction was carried home to the mind, heart and conscience.’

The remains of the late Rev. T. Cummin were laid to rest in the cemetery in the presence of some three hundred persons.

The first part of the service was held in the Primitive Methodist Church in Bartholomew-street; at which an address was delivered by the Rev. D. Harding of Aylesbury, who said that Mr. Cummin was born in 1811, and was one of the earliest converts to Primitive Methodism in Hampshire. He came from a group of villages on the Hampshire Hills which had produced several men of great preaching ability who had entered the Primitive Methodist Ministry. Mr. Cummin was in the ministry 53 years, 32 years of which he was in more active service and 21 years as a supernumerary.

It was 41 years ago that he (Mr. Harding) first heard Mr. Cummin. He was then conducting a camp meeting in the Bath Circuit. His finely manly appearance, and his zeal and ability made a deep impression upon him. Mr. Cummin was a prince of preachers, and was never at a loss for a sermon, and never unready when his services were needed.

Mr. Harding gave some personal reminiscences of three successful years he spent in the Witney Circuit, with Mr. Cummin and Mr. Herridge as his colleagues, and paid a tribute to his fidelity. The Revs. T. Kench, G.C. Crickmay and J. Harding also took part in the obsequies.

Several wreaths were placed upon the coffin, and at the grave the hymn was sung:-

“Though often here we’re weary
There is sweet rest above;

the refrain of which is “There is a sweet rest in heaven.”

Among those present were friends from Hungerford, Reading, Swindon and other places. The funeral service will be preached on Sunday evening by the Rev. Joseph Harding.