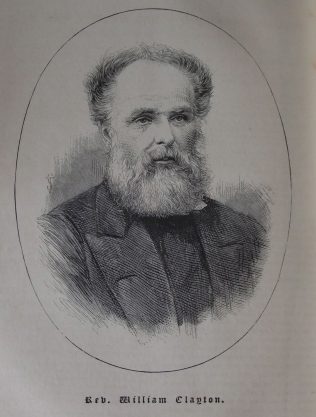 William was born on 10 July 1829 at Retford, Nottinghamshire to parents William and Lucy. William and Lucy were Wesleyan, but three of their sons, Benjamin, Alfred and William all became PM ministers. William senior was a blacksmith.

William was converted in the Wesleyan church and remained there until 1849, the time of the Reform agitation, when he united himself with the Primitive Methodists. Within two years of joining the PMs he was recommended for the ministry. Before becoming itinerant, Will worked as a cabinet- maker.

William’s obituary records that his preaching was powerful, and his sermons truth on flame, heart-searching, apostolic and demonstrative of the Spirit.

In business aptitudes, in his knowledge of rule and usage, in the administration of discipline, and the guidance of church life and work, he was a master of method, a leader of wise discretion, a pillar of strength, on whom you could confidently rely.