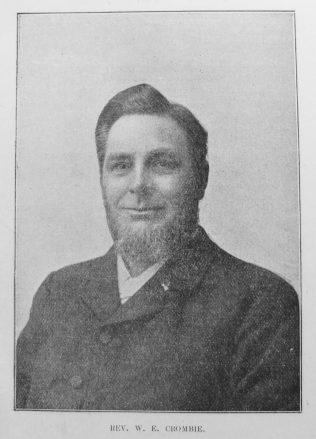 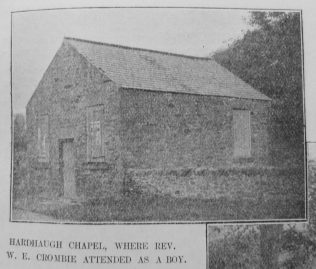 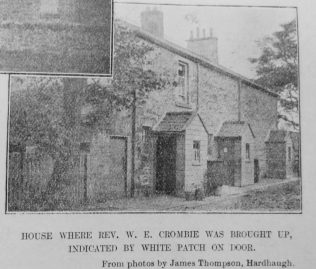 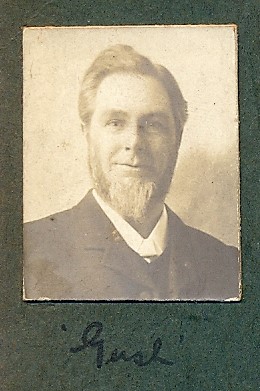 IT has been said that God’s best gifts to the world are good men, if this be so then it is matter for thankfulness that every period of history, and every condition of life has been blessed with the ministry of such.

In this category we may without doubt include the subject of this article, for Mr. Crombie was pre-eminently a man of transparent sincerity and genuine goodness. It is beside our present purpose to attempt a biographical sketch of his life, but a few of the prominent landmarks of that life should be noted. He was born in London, on December 24th, 1848, and he died at Elmfield College, York, on April 20th, 1904. Having the misfortune to lose his father in early life, he and his sister were taken to live with their uncle and aunt at Hardhaugh, near Hexham.

The spiritual crisis in his life came when he was a lad of fourteen years of age. During the years 1861-64 the Rev. J. Snaith travelled on the Hexham Circuit, and it was while he was conducting revival services at Hardhaugh, that both Mr. Crombie and his sister were converted. Mr. Snaith was accustomed to call at the house on his way from Haydon Bridge to Hardhaugh, and from the first took a kindly interest in the boy and girl. In after years the sister became lady’s maid to Lady Napier, and was instrumental in her ladyship’s conversion.

In a letter written to Edward Davidson, Esq., of Hexham, on January 1st, 1904, Mr. Crombie stated that he first tried to speak in public at Haydon Bridge in 1864, in company with the late Mr. William Mews. He describes himself as being at that time, “a young laddie in a short jacket.” He and the Rev. H. Yooll, the Connexional editor, came on the plan together, and were candidates at the same time for our ministry. In this same letter he says: “Nearly thirty-four years have gone since I left Tyneside, but my heart is as young as of yore, and the Church of my early choice is dearer to me and means more than of yore”

It was during the superintendency of Rev. J. Hallam on the Hexham. Circuit that Mr. Crombie received his call to the ministry, and it was largely owing to Mr. Hallam’s kind influence that he ultimately consented to what with his sensitive nature he regarded as too great and solemn a task.

After spending a year at the Sunderland Institute he was appointed by Conference to London, and it is significant that the whole of his active ministry of thirty-one years was spent on the four following circuits. The old Sutton Street Station, where he served his probation; Hammersmith, where he married Miss E. Antliff, daughter of Dr.  Antliff, Croydon, and Forest Hill. On each of these circuits he did good and enduring work. He was a faithful and devoted Circuit minister, careful and attentive to the manifold details of Circuit Work, and primarily concerned about the moral and spiritual welfare of the people.

It fell to his lot to engage in several chapel building, renovation, and debt reduction schemes. He also took an active part in the official and administrative affairs of the district and the Connexion. He was painstaking and conscientious in whatever duty he undertook. His splendid work as secretary of the Alresford Orphan Home will endear his memory to the hearts of many. As is well-known the last two and a half years of his life were spent as Governor of Elmfield College, York, and he was full of schemes for the welfare of the institution, when, with tragic suddenness, the summons came, and the busy toiler ceased at once to work and live.

Of Mr. Crombie’s genuine goodness there could be no doubt. This was probably the most impressive feature of his character and work. He did not parade his piety but he made it felt. Neither did he interlard his conversation with the stock phrases and pious platitudes that pass muster as the marks of goodness with some, but he impressed all who knew him with the weight and reality of his solid goodness. The basis of his character was sincerity, genuineness. He had an instinctive aversion to all forms of sham, unreality, and pretence, and while deeply devout and spiritual, he had little patience with religious cant. He cherished a great love of righteousness. What concerned him supremely was not whether a thing was politic, but whether it was right. Arising out of his goodness was his wonderful power in prayer. This was especially seen and felt when he was leading an assembly in devotion. No one who heard him offer the opening prayer at a public service will ever forget the impression made. The comprehensiveness, the felicity of expression, the deep-toned reverence, and the intense spiritual fervour, were most helpful to worship. One secret of his success was the fact that he fed his inner life with constant private prayer and meditation. He was a devout soul. Amongst his private papers after his decease there was found a prayer which he had written out for his daily guidance, in which he desires the chief good, a clear insight into spiritual truth, high-souled reverence, tender consideration for others, and a devout life full of unselfish service.

Strong common sense and robust manliness were also prominent features of his character. His mind and will were well under control, and his judgment could be trusted. He was incapable of a mean action, and while affable and conciliatory, yet he never trimmed his sails to catch the popular breeze.

Mr. Crombie was built on a large scale, there was a strength and vigour of intellect, matched with a robustness of physical form which made him stand out amongst his fellows. You instinctively felt when in his company, here at any rate is a manly man, and your instinct did not deceive you, for a closer acquaintance revealed some of the finest qualities which go to make for true manhood.

He was also a man of broad and tender human sympathies. This was notably seen in his care of the orphan children. The work of the Alresford Orphanage appealed to his kind heart, and he was untiring in his efforts for its prosperity. He would meet the children who were sent from the provinces at the London Station, look after their comfort, and see them safely to their destination. Early in life as a boy he was known for his kindheartedness to the sick, the poor, and the aged.

Stories are still told at Hardhaugh of the kind youth who would visit the lonely cottage, prepare the tea for the sick and aged inmates, and help them in their domestic duties. On his first station, finding a family destitute, he sold his best boots to help them. He often spent whole nights watching with the dying.

The writer looks back with grateful affection to the kindness of Mr. and Mrs. Crombie towards himself, when as a young minister on probation, suffering from a serious nervous breakdown, the hospitality of their home at Croydon was freely placed at his disposal. With Mr. Crombie to see suffering or need was to feel pity, and to feel was to help. His warm, human sympathies moved the activities of his nature, and led him to stretch out the helping hand. Many a young man and maiden away from home in situation has been welcomed to his home and shared its generous hospitality.

His wonderful cheerfulness and vivacity made it a joy to be in his company. He was no croker. He faced his troubles and difficulties with manly fortitude, and he had the happy art of not burdening others with his private sorrows. His broad expansive smile, his cheery greeting, his tact in making you feel at home in his company, and the readiness with which he entered into your experiences and responded to your appeal for help, greatly endeared him to those who knew him best. He was wealthy in cheerfulness, the very spirit of geniality and friendliness and sympathy. Many will think of him gratefully and lovingly, and will thank God for his good cheer, and for his powers of inspiring and stimulating the best that was in them.

There was always a stateliness of deportment, a courtliness of manner, and a courtesy and consideration about him which marked him off as a true Christian gentleman. And yet there was mingled with this a certain playfulness of disposition which was not above an occasional romp with children. He could be merry and laugh as heartily as any. There was none of the austerity of the ascetic about him. He entered with zest into the innocent pleasures of others. The boys at Elmfield College loved him for his humanness, and many will regard his Governorship of the College as amongst the golden days of their life’s history. And yet he was a man of true dignity of character. Who could command the respect and esteem of all who know how to appreciate genuine worth.

We have not spoken of Mr. Crombie as a preacher, but his gifts and powers in the pulpit and on the platform were of it high order. He was a lover of books, and from the early days of his ministry a diligent and plodding student. His sermons gave evidence of careful preparation; with a firm grip of evangelical doctrine, he combined an extensive knowledge of practical affairs, and he was able to draw from the rich storehouse of a varied experience in order to illustrate and emphasise his subject. As a speaker he was forceful and energetic, and his message was delivered with intense moral fervour and physical power.

Though resident for so long in London he never quite lost his musical Northumbrian burr, but instead of detracting from his effectiveness as a speaker this fact to many added to its charm.

Mr. Crombie’s last years at York were full of untiring Work. At the College he laboured hard to make the institution successful. His influence over the boys was wonderful. He identi?ed his life with theirs and won their respect and affection. He threw himself into the religious work with his accustomed zeal and earnestness, and many of the lads began to live the Christian life under his guidance. His services were freely placed at the disposal of all the Nonconformist Churches in the city, and no one was more welcome in their pulpits than he. He was known and revered for his uprightness of character, his urbanity of disposition, and his willingness to help in every good work. Transparent integrity, high moral purpose, sweetness of disposition, and exuberant helpfulness were combined in him in a remarkable degree. His removal in the prime of his manhood is a distinct loss to the Church he loved so well and served so unselfishly. We thank God for a life so richly dowered with all noble qualities, and though we lament that that life should so soon have closed here, yet we believe its influences will linger long with us for our enrichment in all good things.

William was born on 24 December 1847 in Middlesex, London, to parents William, a coffee house keeper, and Margaret. His mother, Margaret, was a cook. William was baptised on 23 July 1848 at Bryanston Square St Mary, Westminster.